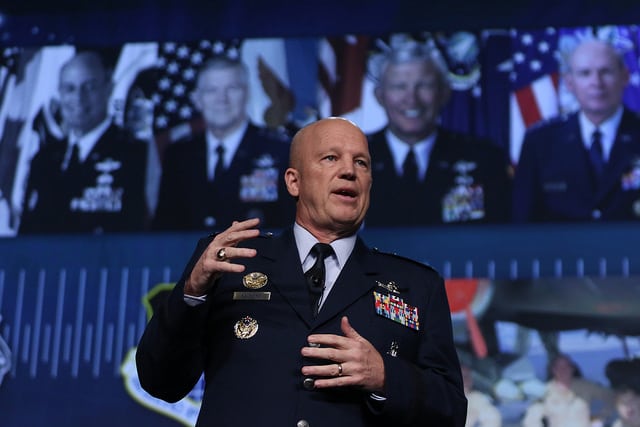 The U.S. Air Force is going to appoint a three-star deputy chief of staff for space to represent the Air Force Space Command at the Pentagon, said Gen. John Raymond during his remarks at the 33rd Space Symposium. According to Raymond, the new appointment will help improve the integration of space assets in multi-domain military operations.

According to Raymond, appointing the new deputy chief of staff is one step toward leveraging space to maintain the U.S.’ military dominance, but he said also that taking advantage of partnerships with organizations such as the National Reconnaissance Office (NRO) is paramount.

In her own speech on the Symposium stage, NRO Director Betty Sapp agreed. “Space is more fundamental to warfighting than it’s ever been … We have an imperative to be as resilient as we need to be in the face of emerging threats,” she said. “The NRO doesn’t have a closer partner than Air Force Space Command.”

To honor the 70th birthday of the U.S. Air Force, Raymond also highlighted the history and future potential of the AFSPC, of which he is currently commander. For Raymond, his interest in space first bloomed in April of 1984, when Gen. James Hartinger, the first commander of the AFSPC, delivered a speech at Clemson University. As such, he thought it appropriate to share Hartinger’s words from 1984 during his remarks on stage.

“Why did we establish the Space Command, and why now?” Hartinger had said at the time. The first reason, he explained, was the obvious Soviet threat. Throughout the ‘70s and early ‘80s, the Soviets launched four to five times as many satellites as the U.S. had, with 70 percent of those launches strictly for military purposes. The Soviets also had an orbital Anti-Satellite (ASAT) system, which was a new threat to the U.S.’ assets in Low Earth Orbit (LEO). The second reason was the U.S.’ newly established dependence on space systems, due to the introduction of the Global Positioning System (GPS) and reliance on satellites for the majority of long-haul communications.

In hindsight, Raymond said this tension marked the first era of the growth for the Air Force’s space capabilities. And if the scenario sounds familiar, it’s because the U.S. has again found itself in the same position, stuck at the “intersection between being heavily reliant on space capabilities and being extremely vulnerable,” Raymond said. “The similarities are striking to where we are today.”

Back in the ‘80s, the anxiety stemming from this tension spurred the U.S. to rapidly bolster its defensive strategies. At the same time, the Soviet threat disappeared, “and we had the luxury of operating in a domain that was now benign,” Raymond said. But the reprieve did not last, as the new Air Force Space Command, minted just nine years prior, went to war for the first time in 1991. “All this work to build that operational command paid a huge dividend, and we saw that in [Operation] Desert Storm,” Raymond said.

The U.S.’ entry into the Gulf War, and the integration of its space assets into that fight, kicked off the second era of growth for the Air Force Space Command on Raymond’s timetable. “We saw space capabilities enable the left hook, if you will,” he said.

Unfortunately, as Raymond pointed out, the U.S. is still very much involved in that fight more than 20 years later. And now that some foreign nations’ space capabilities are more or less keeping pace with our own, the global landscape has ushered in Raymond’s third and current era: space becoming “a warfighting domain, just like land, air and sea.”

China already displayed its ASAT capabilities by blowing up one of its own satellites in 2007; and Russia has also continued to test its own ballistic missiles as recently as last December. “Let me be really clear — we’re not interested in getting in that fight,” Raymond said. “Nobody wins that fight. We are interested in being prepared for it.”

The Space Command’s vision for the future begins with Concept of Operations (CONOPS), and Raymond said the agency is working closely with the NRO to improve CONOPS for integrated Space Situational Awareness (SSA). “We have to shift the focus of SSA from cataloguing to warfighting,” Raymond concluded.