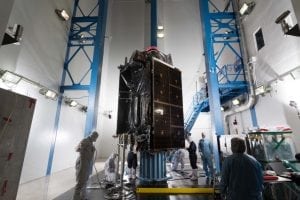 [Via Satellite 08-04-2016] The United States Air Force released its second Request for Proposal (RFP) for an Evolved Expendable Launch Vehicle (EELV) launch of a Global Positioning System 3 (GPS 3) satellite. Following a draft RFP released on June 14 for industry feedback, the Air Force released a final RFP on Aug. 3. Proposals are due no later than Sept. 19, with the mission scheduled to launch in 2019.

The Air Force said in a press release that it will award a firm-fixed price contract that will provide the government with a total launch solution including launch vehicle production, mission integration, and launch operations for the GPS 3 satellite after evaluating proposals through a competitive, best-value source selection process.

ULA did not compete on the first GPS 3 mission earlier this year, which went to SpaceX. Tory Bruno, president and CEO of ULA, told Via Satellite last month that there were technical barriers and competitive considerations that prevented the company from pursuing the contract. Bruno said he is “strongly biased on bidding on this proposal and everyone that comes after.”