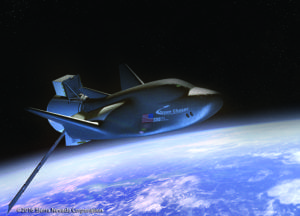 [Via Satellite 06-30-2016] Sierra Nevada Corporation (SNC) and the United Nations Office for Outer Space Affairs (UNOOSA) have signed a Memorandum of Understanding (MoU) toward defining one or more Low Earth Orbit (LEO) space missions using the company’s Dream Chaser spacecraft. Dream Chaser is a reusable, orbital spacecraft designed to be a flexible “Space Utility Vehicle” (SUV) and transportation system for a variety of LEO missions.

Under the agreement, UNOOSA and SNC will work with UNOOSA member countries to develop an interface control document and payload hosting guide to allow payloads developed by participating countries to be hosted and operated on a dedicated mission. By using Dream Chaser as a flexible SUV for LEO missions, countries will benefit from social, economic and educational opportunities.

Dream Chaser is capable of crewed and uncrewed transportation services to LEO destinations such as the International Space Station (ISS). SNC received a Commercial Resupply Services 2 (CRS2) contract from NASA in 2015 to provide cargo delivery, return and disposal services for the ISS.

“Our vision, in partnership with the UN, is to provide UN member countries affordable access to space and a range of multi-mission opportunities using the Dream Chaser spacecraft to host a wide range of payloads. Countries will be able to customize their participation level commensurate with the maturity of their space capabilities and national desires, while engaging their universities, industrial companies and government laboratories, and most importantly, their people. We offer a complete turnkey solution for participants, providing not only the spacecraft, but all aspects of flight including mission planning and operations,” said Mark N. Sirangelo, corporate vice president for SNC’s Space Systems business area.