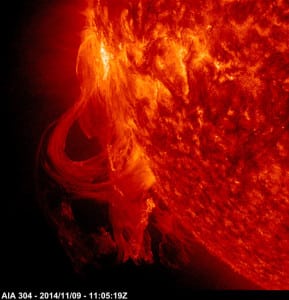 A solar prominence, caused by powerful magnetic forces on the surface of the sun. Photo: Solar Dynamics Observatory/NASA

[Via Satellite 11-24-2014] Several agencies of the United States government are interested in greater amounts of data on solar activity. Flares and dramatic high energy bursts called Coronal Mass Ejections (CMEs) can and do bombard Earth’s atmosphere with highly energized particles. When a CME occurs, research satellites such as NASA’s Solar Dynamics Observatory (SDO), the Advanced Composition Explorer (ACE) and the NASA-ESA Solar and Heliophysics Observatory (SOHO) make most of the observations. But, as the U.S. government seeks to improve its ability to forecast space weather, new kinds of information are needed.

“Right now we are relying a lot on the NASA research fleet. We have two operational satellites systems we use for forecasting: the GOES system and the DSCOVR satellite, which will launch next year. Outside of that we are relying on research satellites to do our job, and these research satellites are not specifically tailored to operational forecasting,” Thomas Berger, director of the Space Weather Prediction Center at NOAA/National Weather Service, said Nov. 20 at the “Beyond the Flare” space weather briefing cohosted by the Secure World Foundation (SWF) and the American Astronautical Society (AAS).

Space weather can have significant impacts on satellites and end users. High-energy protons or sometimes galactic cosmic rays can cause single-event upsets in satellite electronics. Lower energy electrons, however, tend to collect on the spacecraft’s surface, potentially disabling components when discharged.

The sun is currently at the peak of its 11-year solar cycle. During this time, it has more sunspots than normal as well as an increase in solar activity. When the sun emits an Earth-directed CME, it impacts the upper atmosphere, causing currents in the ionosphere, among other effects. Earth’s upper atmosphere heats and expands, requiring satellite operators to adjust their spacecraft’s orbit to resist the increased drag.

“All of this combines to generally take one or two satellites out per solar maximum,” said Berger. “This solar cycle has been a little weaker than others; I don’t think we had any catastrophic losses of spacecraft, but during the last one we had several.”

Perhaps the most famous CME is the Carrington Event — an enormous burst of solar particles that hit Earth in 1859, causing auroras at latitudes well below the norm, and damaging telegraphs, which were the main technology impacted at the time. Today the influence of such an event would be felt much more severely. If a solar geomagnetic storm created another Earth-directed, Carrington-type blast, the radiation could inhibit Global Navigation Satellite System (GNSS) signals, telecommunications, power grids and other modern technologies.

The consequences of such an event would be far reaching, but Berger noted that equally, or perhaps more powerful storms have already occurred over the past 150 years.

“We tend to focus on the Carrington event as being the largest in history. In fact, research is showing that it is perhaps not that unusual to have an event that large. We just haven’t had one hit Earth since 1859,” he said.

Furthermore, since this solar storm occurred well before the dawn of space exploration, our understanding of its true magnitude is limited.

“We don’t know what a Carrington-type event is because we never had the measurement to detect what such a flare could do on the ground,” added Madhulika Guhathakurta, STEREO program scientist, Heliophysics Division at NASA’s Science Mission Directorate.

The U.S. Air Force and Navy have heavily funded research on space weather and the Earth’s ionosphere due to its effects on navigation and long haul communications, according to Col. Robert Swanson, chief of the Weather Strategic Plans and Interagency Integration Division at the Air Force’s Directorate of Weather. The high-energy particles can sometimes be perceived as stars, resulting in satellite disorientation since these often use stars to track their orientation relative to the Earth. They can also interfere with a satellite’s performance — something the Air Force would then need to determine the cause to make sure it is not a technical anomaly or a deliberate attack, he said. The Air Force is building the Next Generation Ionosonde (NEXION) ionospheric sounder network, and the Space and Missile Command is in the process of fielding operational ground-based receivers that can measure scintillation in the ionosphere for the Air Force weather agency. Swanson said these sensors would be stationed in or near the magnetic equatorial region where scintillation is most present.

There is interest in commercial space weather from companies such as Sentinel Satellite, but traction here is less than what is currently being seen with Earth-weather space companies such as Tempus Global Data, PlanetiQ, GeoMetWatch, GeoOptics and others. Berger said NOAA would be excited to see commercial solutions arise if they can overcome the unique mission requirements.

“We would be interested in anything that would develop [commercially] because these are very complex missions and any help we can get is welcome,” he said. “They are however typically deep space missions, which require large propulsion systems, very robust communications systems, and planet-spanning communications networks to download the data. Unlike a weather satellite, which is in [Low Earth Orbit] LEO or [Geostationary Earth Orbit] GEO where you have one dedicated antenna for instance, in deep space, space weather observatories have to have a very extensive network of communications, but it’s not outside the realm of a commercial operator who is ambitious enough.”