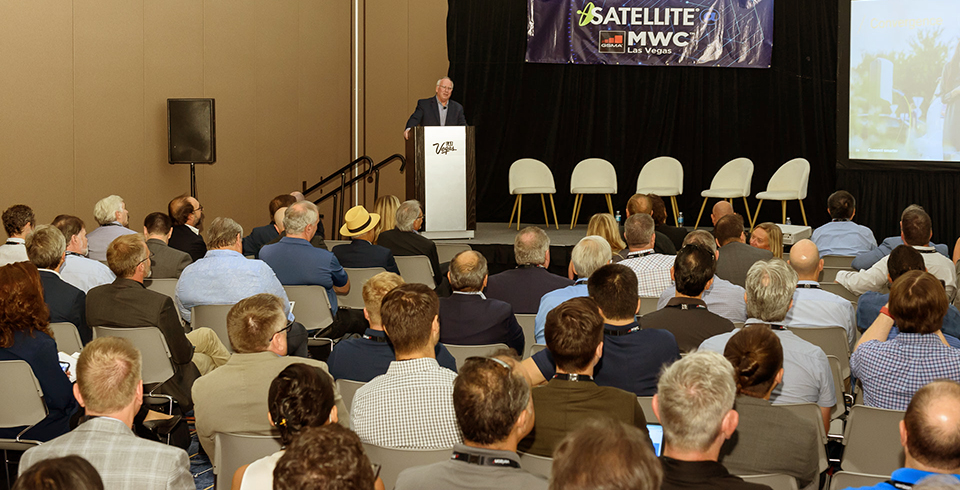 The cellular wireless industry is coming to a long-awaited realization that it cannot evolve and expand on its long-term business plans in the 5G era without the help of satellite services, according to keynote speakers from Globalstar, SpaceX, SES, and Intelsat, who spoke to a packed conference room on Sept. 29 at the SATELLITE @ Mobile World Congress event in Las Vegas.

Globalstar CEO David Kagan kicked off the event by highlighting the satellite operator’s recently announced contract with Apple — now its largest customer. Kagan said the deal will drive complementary “convergence” between satellite and terrestrial worlds, as well as new business and capabilities in both directions.

“Through new wholesale agreements, our excess capacity can support an approximately 50-fold increase in our own subscriber base following recent and planned investments in our space and ground segments. This growth is going to happen quickly,” said Kagan, who also highlighted how the Apple deal will expand the reach and impact of Globalstar’s emergency services. “On their own, our SPOT product line and satellites have saved 8,600 lives during the last 15 years. That’s 1.6 lives per-day on average servicing 250,000 customers. Imagine how many lives we can now save as we add those services to Apple’s iPhone 14.”

While speakers like Kagan acknowledge that satellite and terrestrial wireless industries have been discussing collaborative business opportunities in private meetings for years — the consensus was that several key factors are pushing pens to the dotted line and conversations to the public. These factors are: the broad acceptance of the 3GPP wireless standard; rising terrestrial infrastructure costs putting rural communities out of reach; lower satellite bandwidth prices and barriers to entry; the realization of direct satellite-to-cell connectivity (cell towers in space); and Globalstar and SpaceX Starlink making headlines with big partnerships.

SpaceX Senior Director of Satellite Engineering Sara Spangelo, former CEO of Swarm Technologies, also delivered an opening keynote address in a fireside chat, during which she highlighted the recent partnership announced between Starlink and T-Mobile. Spangelo said that it will not be long before Starlink service can be utilized on any consumer cell phone.

“A modern cell phone is essentially an underpowered, poorly located satellite antenna for a cell tower in space,” said Spangelo. “We spend pretty much every day testing Starlink connectivity to the cell phone in various scenarios, such as having the phone in your pocket, or being under tree cover, or being in a car. It’s really exciting how we’re making this work. Being in a car is the most challenging scenario, but also the most exciting, because we feel this is the way we unlock the automobile as a truly complex, connected environment.”

Spangelo said that T-Mobile is the first of many partnerships to come. “You’ll hear more announcements very soon with a variety of new partners and customers,” she said.

Those new customers — mainly consumers in rural/remote regions and businesses in new verticals — represent the real incentive for satellite and terrestrial companies to work closer together as partners, according to several speakers at the SATELLITE @ MWC event. As the global economy climbs out of the COVID pandemic and into inflation and a potential recession, today’s largest wireless carriers find themselves trading customers with each other instead of signing new subscribers. On the satellite side, a spike in bandwidth supply created by a wave of new Low-Earth Orbit LEO constellations lowered the cost of bandwidth enough to make wholesale deals attractive. By partnering with wireless carriers and using their handsets as service distributors, satellite operators don’t have to invest in changing their business models to be more direct-to-consumer.

SES’ Head of Telco Portfolio and Solutions Carlos Gutierrez focused his talk on how the European operator is building mutually beneficial relationships with telco partners by helping them expand 5G services out from cities to rural, remote, and isolated places.

“5G is triggering the demand for satellite network services in volumes we’ve never seen before — from resiliency links, to private 5G networks for many types of remote enterprises, to mobility 5G broadband access across sea, air, and land,” said Gutierrez. “However, meeting this demand is very challenging from an infrastructure standpoint. And what’s most important, creating a ubiquitous 5G network means the 5G experience in remote places needs to resemble as much as possible the one in urban locations, where cloud-based apps are capable of communicating anyone or any machine or process, in almost real-time, anywhere they are.”

Hadeel Fayad, head of Cellular Backhaul at Intelsat, said she agrees with her competitor’s view of 5G demand driving backhaul business for GEO operators and expanded on those opportunities in delivering 4G LTE backhaul. Fayad, who formerly worked in senior positions at wireless carrier Sprint, said she believes that the wireless industry’s recent change of attitude towards satellite backhaul services is the result of the elimination of performance concerns. Meaning – wireless carriers are starting to realize that satellites are a lot more powerful and capable of enhancing modern connectivity services.

“The fact that Intelsat satellites can deliver carrier-grade performance means we can meet the needs of most customer use cases,” said Fayad just before offering video proof of a backhaul customer in Germany running a downlink/uplink speed test. “Intelsat has built a multi-hierarchical network to meet future needs while continuing to deliver the expected quality of experience.”

The main obstacle standing in the way of lucrative satellite and cellular partnerships is, ironically, a communication issue. Even in 2022, the satellite and cellular industries struggle to understand each other’s business models and the language they use to describe services. Speakers from both industries acknowledged that the complex nature of satellite technology makes educational programs like the one hosted at Mobile World Congress Las Vegas important.