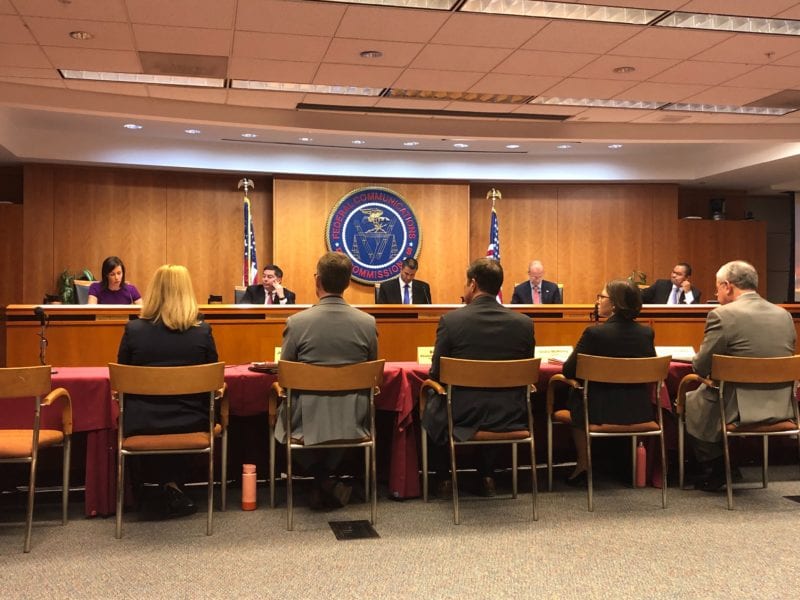 The FCC voted to free up the C-band spectrum on Feb. 28. Photo: Via Satellite

FCC Chairman Ajit Pai praised the Commission for taking action and defended its legal authority to do so.

“The goal of leading the world in 5G is too urgent, the need to close the digital divide to pressing for us to put off action indefinitely,” Pai said. “The time to act is now, and we are acting. And we should in part, because the law says we can.”

Within the 3.7-4.2 GHz band, the FCC is allocating the 3.7-4.0 GHz portion of the band for mobile use, and 280 megahertz from 3.7-3.98 GHz band will be auctioned by the FCC for wireless services in the contiguous United States. Commissioners expect the auction to generate tens of billions of dollars.

Satellite operators with licenses for the spectrum will receive both compensation for the cost to relocate the spectrum and accelerated relocation payments to incentivize them to clear the spectrum quickly, up to $9.7 billion total, divided between Intelsat, SES, Telesat, Eutelsat, and Star One. The FCC is creating a Relocation Payment Clearinghouse to manage this process, and a Relocation Coordinator to oversee the migration of incumbent earth stations.

Under the draft order, Intelsat is eligible to receive up to roughly $4.85 billion, about half of the proceeds; SES roughly $3.99 billion; Eutelsat roughly $468 million; Telesat roughy $375 million; and Star One roughly $13.7 million.

Satellite operators, which once presented a united front in the C-Band Alliance, have argued in recent filings to the FCC over what percentage of the accelerated relocation payments each should receive. Intelsat argued that it should receive 60-70% of the payments. Pai said Friday that Intelsat made “constructive” suggestions for edits to the order, but the FCC did not believe the record supported substantially increasing Intelsat’s portion of the payment. He said the full FCC item, which is coming early in the first week of March will finalize how much each operator will receive.

SES and Telesat put out a joint statement on Friday in praise of the vote.

“This momentous decision is a win-win-win for U.S. leadership in 5G, American taxpayers, and the nearly 120 million U.S. households that rely on the C-band for their cable and broadcast programming,” the statement said.

FCC Commissioner Michael O’Rielly voted in favor and said the item ends the proceedings on a “positive upswing.” He defended the accelerated relocation payments and said they are justified under the FCC’s Emerging Technologies framework.

“Satellite companies provide valuable services to their contractees, but are willing to do more with less, with varying degrees of difficulty, to enable the government to meet its 5G objectives,” O’Rielly said. “Compensation was therefore always going to be a part of the equation. In the end, almost everyone came around to this thinking, even if they may not agree with the exact funding level.”

Commissioner Brendan Carr also voted in favor, and said the item lands in the “perfect spot.” “You might know that we got it right, ironically, by the grumbles you hear on both sides,” he said.

But Commissioner Jessica Rosenworcel, who voted against the proposal, said the FCC has no legal authority to mandate accelerated relocation payments and such payments must be voluntarily negotiated between the parties. She also said the $9.7 billion-number for the payments is “at best, back of the envelope math” and called it an “effort to justify backroom deals.”

“If we accept the FCC’s argument here, it is hard to imagine any limitation on the agency’s ability to require payments for any purpose that even loosely can be connected to some spectrum-related goal as a condition of auction participation, and that simply cannot be true,” Rosenworcel said.

Commissioner Geoffrey Starks, who also voted against the proposal, said the Commission has entered into a deal that will “take money from American taxpayers for foreign satellite operators who may not keep their end of the deal,” and accused the CBA of looking for a windfall.

Starks also raised the spectre of litigation and bankruptcy, arguing that it could leave the FCC stuck in the same position it is now.

Bloomberg Law previously reported that Intelsat had hired law firm Kirkland & Ellis to consider filing for Chapter 11 bankruptcy. Via Satellite reported in February that such a filing could put a stay on the FCC’s auction.

Chairman Pai said in a press conference that he is “optimistic” that the accelerated relocation payments adopted will encourage operators to clear the spectrum quickly.

“The spectrum is going to be repurposed one way the another,” Pai said. “Either satellite operators can do so quickly and get the accelerated relocation payments, or they can do so more slowly and receive no such payments. The choice is obviously up to them.”

Correction: A previous version of this article misstated the voting breakdown on the C-band decision.