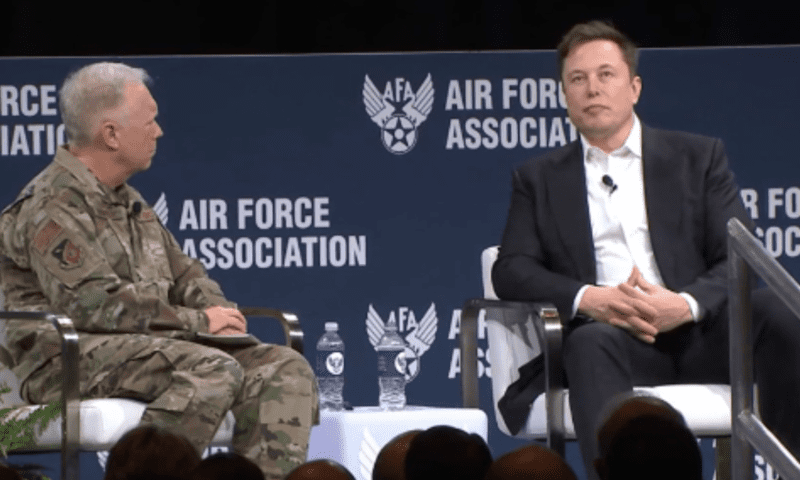 ORLANDO, Fla. – SpaceX has managed to bring the unit cost down to build its Starlink broadband internet satellites, but needs to do the same for its forthcoming Starship launch vehicle to achieve true cost savings to send the systems to orbit, leader Elon Musk said Feb. 28.

It is now less costly for the company to build the Starlink satellites than it is to launch them into orbit, Musk, the company’s founder and CEO, said Friday during a fireside chat with Space and Missile Systems Commander Lt. Gen. John “JT” Thompson at the Air Force Association’s annual Air Warfare Symposium here.

Launch costs for Starlink are still not as low for the new constellation as Musk would like them to be, even when launched on a Falcon 9 rocket “in its most reusable iteration,” he noted.

“The satellite is in a good situation, and the cost of the satellite will be coming down as we are able to … make design improvements” to the Starship prototype in development in Texas, he added. “We really need the Starship to carry Starlink in order to get the total delivered cost to orbit to be much better than it is today.”

Starship is being built as a fully reusable second stage launch vehicle that could perform long-term cargo and passenger transportation. While it will be capable of launching on its own, it is expected to be used on orbital launches in conjunction with SpaceX’s Super Heavy space vehicle. Musk said at the conference that he encouraged healthy competition for reusable space systems in the commercial industry.

Musk told Thompson that SpaceX has benefited from its decision to build the Starlink production line in tandem with the satellite’s design development, noting that the company learned which parts would be more difficult to manufacture early on.

“We discovered there’s all these things in the design that are quite difficult to make, and therefore that has changed the design,” he said.

Air Force Assistant Secretary for Acquisition, Technology and Logistics Will Roper told reporters in a Feb. 21 roundtable that the Starlink systems will participate in a second ABMS demonstration in April.