EXCLUSIVE – Intel Exec Speaks Out About 5G Initiative with Intelsat 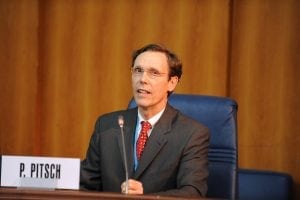 Peter Pitsch, Intel’s executive director of federal relations and associate general counsel, refuses to get in a war of words. The company’s announcement last week, in partnership with Intelsat, about spectrum being used for 5G services has been the talk of our industry — and not in a very positive light. In a previous Via Satellite story published earlier this week, Intelsat’s initiative was blasted by ABS CEO Tom Choi and AsiaSat CEO Andrew Jordan, who both believe the potential proposal by Intelsat and Intel in the United States could have  negative consequences for the satellite industry. Choi used terms such as “ridiculous” and “ludicrous,” while Jordan called the move “divisive.” Rodolphe Belmer, CEO of Eutelsat, was more circumspect in his assessment, saying Eutelsat needed time to evaluate Intelsat’s move. The one thing we didn’t hear was any praise.

“I am not going to comment on what other people have said,” Pitsch told Via Satellite. “I believe Intelsat and Intel have come up with a proposal that is very constructive. It is voluntary; it allows the FSS operators to control their fate. This proposal does not make FSS operators worse off — it gives them an option. Others might disagree with that, but I am willing to stand behind this assertion.”

Last week, Intelsat’s Dianne VanBeber shared her take on the proposal with Via Satellite. Now, Pitsch has shared  Intel’s view of this collaboration, in what he calls a “win-win” for all of those involved, which is a contested position to say the least. Many in the satellite industry believe that if this arrangement happens in the United States, it could lead to other regulatory authorities worldwide adopting a similar position.

“We believe this is in the public interest,” said Pitsch. “We see this as a win for us, a win for the relevant FSS operators, and a win for society.”

Pitsch confirmed that Intel entered into a Non-Disclosure Agreement (NDA) with Intelsat this summer to discuss all this. He said Intel, as a business, has been looking at the 3.7-4.2 GHz spectrum for possible for 5G use and that the company recognized there are valuable uses by FSS licensees and their customers.

“The situation is extremely complicated; it is complicated because of all the different customers and arrangements. Freeing some of this spectrum efficiently would be complex, because there are so many different ways it could be done, and they all involve different costs,” he said. “As we thought about this, we recognized that the use by the FSS licensees was relatively concentrated in a few satellite operators. And, if we really believed that our use [terrestrial mobile] would be valuable, we should have the courage of our convictions and explore with them [satellite operators] whether or not they would be interested in getting flexibility.”

Pitsch said satellite operators need to look at this in an economically rational way to see the benefits of such an arrangement, and gave some interesting insights on how the talks with Intelsat started to develop. “We believe they [Intelsat] are economically rational and have the information, and if they get the flexibility to consider all of these trade-offs, then they, over time, will make some spectrum available. So, we sat down with them, we broached the idea, and they didn’t throw us out of the room,” he said. “They thought about it, and we had a lot of discussions. We proceeded cautiously and rigorously, and at the end of the day, we got to a point where both sides felt comfortable filing the joint comment, which if you read it carefully, says we may still disagree on a number of things, but looking forward, this looked to be the way to protect legitimate incumbent interests and efficiently enable terrestrial use.”

In what is clearly an emotive subject for satellite players, Pitsch repeatedly stated throughout our interview that the essence of this deal was to give FSS operators “another option” in terms of dealing with spectrum issues. He very much put the ball in operators’ court in terms of what happens next. “[FSS operators] continue to control their fate. We believe their use is valuable. If we give them flexibility, they will do the right things by their shareholders and society. We think there will be more terrestrial mobile use over time. While I fully can see that I might be wrong — that 5G might not be the best thing since bottled beer — [under this proposal] the outcome will be driven by market forces and the shareholders of the FSS operators weighing up all the relevant choices. The Joint Comment says that within one to three years, some spectrum for terrestrial mobile could be made available. This is not a regulatory fiat. This is a decision that will rest with the FSS operators,” he said.

Pitsch spoke of Intel and Intelsat looking to persuade different parts of the satellite and 5G ecosystem, the merits of “not being at war” and coming to a solution. He also said that there may be terrestrial mobile operators who will want more than what this deal offers.

“There are [some mobile operators] that think the right way to go is to impose substantial requirements on the band, and I think the FSS operators would find that far less attractive than what we are proposing here. This proposal is not occurring in a vacuum. We could all go to war for another four to five years. I think 5G will prove to be far more valuable in many countries than FSS operations. However, my good friends at Intelsat won’t agree with me. But rather than have that fight, let’s come up with a position where we have common ground and benefit society as a whole,” he added.

Pitsch said Intel’s position is essentially around strictly promoting 5G use efficiently, and hopefully to the benefits of consumers and society as a whole. While this is clearly a laudable aim, many in the satellite industry believe that the services that FSS operators offer are equally as valuable. Certainly, this announcement has sent shock waves throughout our industry, and time will tell if this is a good thing or not. The jury is most definitely still out.