Demand, Challenges and Satellite in Afghanistan – From Our Archives

President Trump announced this week that additional American troops will join the more than 8,000 already stationed in Afghanistan, further extending the longest war in U.S. history at nearly 16 years. During that time, Afghanistan has worked to modernize its use of satellites for telecommunications and other services. In this interview with Amirzai Sangin, Afghanistan’s communications minister in 2007, we look back 10 years at his plans to improve satellite connectivity in the country. This article was published on Via Satellite’s February 2007 issue.

Nearly three decades of war have left Afghanistan’s communications infrastructure in ruins. The new government is determined to rebuild these links in order to improve the quality of life for its nearly 31 million citizens. Since Afghanistan is mostly a rural, mountainous country, satellite technologies are playing a vital role in this effort.

“Five years ago, there was no telecoms infrastructure,” says Amirzai Sangin, Afghanistan’s communications minister. “Whatever infrastructure we had from before the war was either obsolete or completely destroyed. The people of Afghanistan could not talk to each other. There was no communication between the cities. Even within the cities, there was hardly anything available. Many of our people had to travel to neighboring countries to make phone calls.” The task facing the Afghan government was to try and restore communication links, particularly important given that the recently deposed Taliban still provides a threat to the government and citizens. 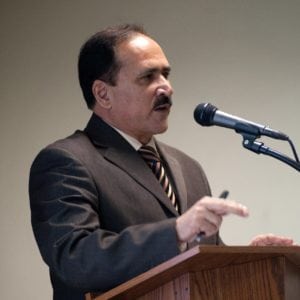 The Ministry of Communications has two projects based on satellite communications underway, says Sangin. The first project connects 34 provincial capitals with the country’s capital Kabul and also connects Kabul to the rest of the world. This system is one of the major backbones for the government’s communications network, providing telephone, Internet and videoconferencing services.

Afghan President Hamid Karzai is a keen user of the satellite technology, says Sangin. “Our president has been using this system several times whenever there were major events in the provinces,” he says. “We have a lot of anti-government activities, particularly in the southern provinces. There are times when the president wants to talk to the local governor or the people of that region. This facility has been very useful, and he has been able to talk to these people whenever he wants. This facility is available for government ministers to use across the country.”

The Afghan government also is implementing a Hughes Direcway solution for connecting smaller rural areas. The system is intended to provide communication services for local district headquarters as well as villages and gives the government the capacity to connect up to 24 voice channels as well as provide data capability of up to 256 kilobits per second to any location in Afghanistan, Sangin says.

To date, the government has invested $35 million in the two satellite systems, while the private sector has contributed $80 million to $100 million, Sangin says. Bringing connectivity to all the rural communities will take even more effort and more investment to expand the system and truly bring communications to all citizens, he says.

“We expect this figure to continue to grow for the next two to three years,” he says. “Afghanistan is a country with 34 provincial capitals and 350 district headquarters, but apart from that, there are 38,000 villages spread across the country in small, small valleys between the mountains. It is quite a challenge to bring connectivity to all these areas. We would like to expand the Direcway small satellite system into the villages so we can bring telephony and Internet services here using a small satellite terminal with a minimal amount of equipment and, therefore, the investment for each village is kept low.”

There already are four GSM operators and more than 2 million phone users in Afghanistan, and there is an eagerness to connect all these users to each other and to the international community.  “I can tell you the demand for telecoms services in Afghanistan is huge,” Sangin says. “The people of Afghanistan are very happy for all the advantages they have received from the expansion of telecoms services to the different areas of Afghanistan. The services now cover over 80 percent of the population, which is equivalent to 20 million people. Because of the 25 years of war there are huge numbers of Afghans living abroad and all of them are able to talk to their relatives back home and results in huge traffic revenues coming into Afghanistan.”

As well as improving inter-government communication, there are a number of other benefits. “We think that the telecoms sector actually drives economic development of the country,” Sangin says. “Now that we have established telecom infrastructure we are able to watch TV. We are able to get reports from across the country on what is happening in the country. This would not have been possible if the telecoms infrastructure was not put in place. Telecoms has been a major factor in the development of the media. Afghanistan had just one national TV channel. Now there are seven to eight private-sector TV channels. All these TV companies receive major amount of funds from the telecoms sector through advertisement. There is a major push in the media sector.”

This development also is helping create jobs in a country where they are at a premium. “The growth of the telecoms and satellite business has led to new numbers of jobs being created,” says Sangin. “We estimate that 50,000 people are working in the telecoms sector, retail, sales, infrastructure etc.”

While around 80 percent of Afghanistan is covered in some form of communications, there remain large areas of the country that still lack services, which is where satellite communications will play a large role, Sangin says. “In the remaining 20 percent of the country which is not covered, there has been a great deal of pressure on us to expand our coverage there,” he says. “That is where we feel using satellite communications and the small capacity system will enable us to expand to these villages and give them some of the same benefits that people have in major cities.”

As the infrastructure develops, satellite technology will provide even more services, Sangin says. The Ministry of Communications is working closely with the Ministries of Health and Education as it looks to improve these services throughout Afghanistan. “As far as health is concerned, we are thinking of using satellite communications for tele-health,” he says. “In smaller places, local doctors could send information on patients using satellite. They can send the information to Kabul, and experts here could help doctors in the villages.

“In terms of education, we are talking to the Minister of Education in terms of how to make best use of the telecoms infrastructure for having educational programs for people in remote areas using Internet or remote learning and using the satellite links for remote learning.” Sangin says. “We feel it is quite possible. The Ministry of Education is working on a strategy, and in that strategy, they want to include this as part of an overall program. Of course, it requires a lot of investments.”

Developing a communications infrastructure in Afghanistan has not been without significant challenges. The main obstacle is the lack of power throughout the country. “There is very little energy available today in Kabul and smaller cities. The majority of our country is without power. When there is no power, bringing such modern technologies requires the use of generators. We have certain challenges to bring modern technologies to remote areas. It is not very easy. It requires a major effort and also a lot of money. The Ministry of Education is working with the donor community. We hope we will be able to raise significant funds, and once we have that, I think that using satellite as the backbone of the infrastructure we will be able to bring education to remote areas.”

While the lack of power is the main obstacle, security and other issues also are unlikely to fade away for the foreseeable future. “There are still security problems, particularly in the south of the country,” Sangin says. “Generally speaking, the telecoms sector has been less affected by the security problems. We thought it could be vulnerable, but fortunately, it has not been targeted. There is a cost involved as telecoms companies have to put security guards in each base station, each switch and each location where they have infrastructure.”

The other challenge is develop more home-grown engineers as the price of bringing in international experts means costs could spiral.  “Another challenge is the availability of capable, qualified engineers to run the networks,” Sangin says. “Many companies from the private sector have brought in specialists from abroad. It costs companies much more money to have these specialists in Afghanistan but Afghans have proven their capabilities by learning very fast and the majority of people maintaining these complex systems now are Afghans.”

Satellite As Part Of An Overall Solution

While two satellite networks are up and running in Afghanistan, the government is eager to expand its use of satellite in order to speed up the development of the country’s communications infrastructure and other services. “Apart from the major satellite solutions, the two systems built by Globecomm Systems of the United States for the Ministry of Communications, I can say that many other private sector initiatives are also there,” Sangin says. “They are bringing satellite solutions to small companies. The need for communications is huge. The progress we have made is considerable, but it has only just started. To expand the coverage of the infrastructure into remote areas, taking into consideration the future volume of traffic, the market for satellite communications is there.”

There is little doubt that in the future, satellite technology will continue to have a vital role in Afghanistan. “The numbers of people today benefiting from satellite communications technology in Afghanistan is huge,” Sangin says. “In the future, it will be reduced once ground-based systems are in place, but I think satellite will have a very strong role in rural areas, which I think is an important component. It is the policy of the government to try and give them the same level of services as the urban areas. While the numbers of people directly affected by satellite communications will go down, the importance will be increased.”