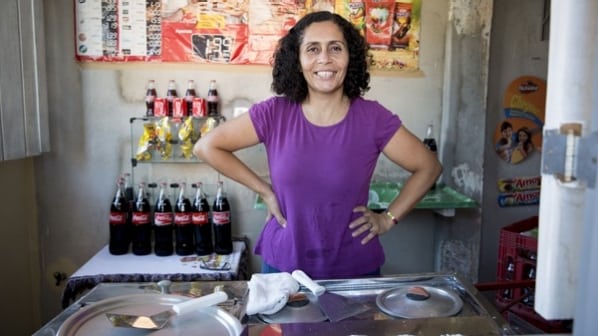 [Via Satellite 10-31-2016] Coca-Cola’s investment in small satellite company OneWeb will allow the soft drink distributer to expand its global footprint and more appropriately manage its supply chain, according to Bea Perez, Coca-Cola’s chief sustainability officer. Speaking at the 2016 Hosted Payload and Smallsat Summit on Oct. 20, Perez and OneWeb founder Greg Wyler laid out non-traditional investors were able to make the business case for investment in space.

“We operate in 207 countries as a business. A lot of those countries are beyond what most people would consider a point of access. We go beyond that last mile, and right now there’s places beyond the last mile that are not connected,” said Perez, indicating that OneWeb can eventually help the company connect distribution to areas they haven’t yet been able to reach.

Wyler has raised $500 million in Round-A funding from both traditional and non-traditional investors, including Virgin, Airbus, Intelsat and Coca-Cola. The company has laid out the mission of enabling internet across the entire planet by launching a 648-micro-satellite-strong constellation that will interlock to create a global coverage footprint. In achieving this, the company says it will manufacture small satellites at a rate of 15 per week.

Should the company achieve this end, it will provide internet access in areas that still have limited connectivity, bridging the digital divide and unlocking new corporate opportunities for companies that are looking to expand their reach, such as Coca-Cola.

At a more micro-economic level, Perez pointed out that OneWeb’s technology could help empower women, who create and influence more than a quarter of the world’s wealth, upwards of $20 trillion, according to the latest sampling from the Harvard Business Review.

“That alone means that you want a program that focuses on women, and if you look at some of the places that this technology is going to enable and empower, it’s in locations where women are suffering the disadvantage the most,” said Perez.

She points to a program at Coca-Cola called 5by20, which aims to empower 5 million female entrepreneurs across the company’s value chain by 2020, with the aim to positively impact those touched by poverty, according to its website. This mission could be easily furthered by OneWeb’s ambition to connect emerging nations as she sees women working to begin and supplement small businesses through the technology already in hand.

“Just in South Africa alone we are working with [United Nations] UN Women with a small group of about 18,000 women retailers. These businesswomen might sell a couple of Cokes in a week, worth maybe $100 a week, but that is putting food on their table and allowing their kids to go to school, and helping them to make a living. When we study some implementation of technology — and it’s slow technology, which is why we’re investing in high-speed satellite connectivity — what we found is that the woman could offer supplemental services,” said Perez.

Women provided with iPads to use as cash registers were then able to sell services around their internet connectivity, such as charging community members for internet access, resulting in an increase of income around 48 percent as a result of adding additional services around connectivity. When OneWeb comes to life, enabling higher-speed connectivity and richer content, Perez believes that women already connected can begin to proliferate goods and services, offering training to other shop members or to schools nearby

“That one woman who was connected through this very simple technology has been empowered and is thriving with a very successful business for herself, which means that now the governments that have been providing her other governmental support don’t have to do that because she is thriving,” said Perez.

In this way, Perez believes that outside investors such as Coke can see big returns when funding satellite or other technologies that promise to widen their distribution base.

“If you’re a business selling any business services in this outlet, why wouldn’t you want to invest in something like OneWeb or these types of technologies?” she asks. “Not only are you going to be making people’s lives better, you’re going to be improving your sales because when that woman increased her sales, she increased our sales at the same time. It’s good business.”