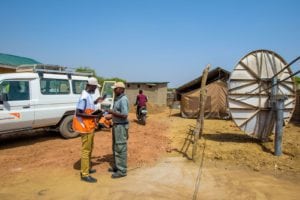 [Via Satellite 07-05-2016] Charity organization World Vision International operates in nearly 100 countries around the world, providing support for a multitude of humanitarian efforts ranging from combating disease and malnutrition to addressing refugee crises and improving access to education. With efforts in a diverse range of countries and geographies, the nonprofit relies on satellite communications to facilitate programs in hard to reach areas.

To meet these needs, World Vision International relies on Intelsat for VSAT communications, and on Thuraya and Iridium for satellite-enabled telephony. Kimani added that the nonprofit uses GPS for tasks such as mapping and monitoring water points, and in the past has used satellite-based tracking devices to track vehicles in some of its field offices. Citing a more recent situation where World Vision deployed satellite communications, Kimani points to Africa.

“We have operations in South Sudan, where infrastructure is lacking in many locations. As a humanitarian organization, we needed to set up an office to provide assistance to people displaced by the fighting there. To ensure that our staff were able to communicate, we used a VSAT, and provided our staff with satellite phones,” he said.

“Such agencies operating in less-than-perfect environments, such as earthquake zones still experiencing after-shocks, also benefit from ruggedized terminal equipment that is easy to set up and operate in harsh surroundings,” he said. “And since many have limited budgets and cannot always accurately forecast their telecom requirements, they often rely on the largesse of satellite operators to provide free or significantly discounted space segment.”

Kimani said World Vision International’s satellite communications needs don’t tend to follow predictable patterns, and are instead typically driven by work/communication demands. He did mention the need for lower cost services as a way satellite companies could further help the NGO community. Because of the high cost of satellite communications, many operators and equipment vendors often provide resources to NGOs more so out of generosity than financial gain.


“Satellite operators frequently find it is in everyone’s best interest to simply forgo the profit motive and donate space segment to agencies or telecoms providers requiring lifesaving connectivity,” explained Murray. “Often the operator will tactfully promote their involvement afterwards, providing good PR for themselves, the industry as a whole, as well as visibility (and links for further fundraising opportunities) for the NGOs in the field.”

Murray said the introduction of greater quantities of traditional widebeam and particularly High Throughput Satellite (HTS) capacity into developing nations and underserved areas is spurring on both lower cost services, as well as greenfield opportunities like new tele-education. He cautioned, though, that for tele-education, operators need to come up with new ways of implementation.

“Successful tele-education endeavors often require a network of specialists that go beyond the typical satellite operator/ Value-Added Reseller (VAR) arrangement. Operators engaging with new customer-facing specialty providers are a plus, as government agencies require more than space-segment solutions. Avanti actively partners with entities that provide terminals, tablets and specialized content and apps, as well as online tutoring services. This goes beyond simply providing connectivity or up/downlink. It involves incorporating the latest consumer products and services into the full offering,” he said.

Murray also mentioned Telecoms Sans Frontieres (TSF) and Medecins du Monde (MdM) use of a mobile data collection system that incorporated Inmarsat capacity and smartphone technology during their 2015 response to earthquakes in Nepal as an example. This enabled medics to reach trouble spots in the field equipped with smartphone-based data collection apps that used BGAN to detect and report outbreaks of disease by streamlining data collection at field level.

Looking to the future, Kimani points to the surge in Non-Geosynchronous (NGSO) satellites as something he is hopeful will have an impact on how World Vision International uses satellite in the future.

“Research into, and interest in, lower-cost Low-Earth Orbiting (LEO) satellites is expected to increase and diversify the usage of satellite communication in disaster management,” he said.