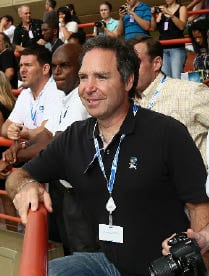 [Via Satellite 03-10-2015] One of the highlights of SATELLITE 2015 will be a speech given by Greg Wyler, the founder of O3b Networks, who will be telling the world about his latest satellite project, OneWeb, which counts with the backing of the Virgin Group and Qualcomm. The plan is to put up a 648 Low Earth Orbit (LEO) satellite constellation and offer Internet via satellite across the world. Wyler is nothing if not ambitious, and this project, if successful, could have huge ramifications for the satellite industry. Here, we talk exclusively to Greg Wyler about his ambitions for OneWeb and how he compares this project to O3b.

VIA SATELLITE: When did you originally have the idea for OneWeb?

Wyler: In late 2011 and early 2012 I really started to dig into the architecture. Obviously, the concept of the constellation has been around for a long time, but once I really figured out how to do it, it just became — well, it needs to be done. If we, and by “we” I mean all of us together, can accomplish this mission for humanity, that would be fantastic. What we are doing is really an extension of a mobile operator network. We don’t connect to cell phones but we do stick cells right into a mobile network operator to allow them to extend themselves into rural markets. We hope to bring the mobile operators coverage further and further into the rural areas.

VIA SATELLITE: What would you say the major differences between making this a success and what you accomplished with O3b? What learnings have you taken from the O3b project to this one?

Wyler: I learned a lot from O3b, certainly. People like Brian Holz were just fantastic at designing the nuts and bolts of the satellites, and keeping everybody focused on the direction. Spectrum is where you start — it is the most important and pivotal part of any system. Once you can be sure of the spectrum in terms of the way it works, operate within it without causing any interference with others, and ensure you have the power on the satellites to provide the bandwidth to the ground, then you have a system.

What I learned from O3b is you really have to get a lot of your ducks in a row before you file. That is what we did with O3b. You need to know that things can be done. It is maybe a conservative approach, but that approach allowed O3b to happen. I think if I didn’t take this approach, these projects would have less credibility.

VIA SATELLITE: Why did you decide to do another project so soon after O3b?

Wyler: O3b was in great shape a couple of years ago. I don’t mean it was done; I mean with SES coming on board and Steve Collar, they really had a great team. I always remained a big supporter in every dimension, but Steve is the driver.

It really wasn’t a desire on my part to go and do something else. It was more a case of I know how to do this. I know how to put this system together. And that this needs to be done.

It is nowhere near easy to do this. The next stage was ensuring that every variable was accurate and that you really know what you are talking about. When do you a system like this, it is not just about being able to do it. This is a system that covers the Earth and works with a lot of other people. You can’t have a half-formed or even a three-quartered formed vision. You need to make sure all the math is accurate, and that everything works from a system, component and regulatory perspective.

Frankly, the satellite piece is important, but only a percentage of the whole system. The communications aspects are as hard or even harder. Handover at these speeds is much more complex than you can imagine, which is why having great partners like Qualcomm is super helpful, if not pivotal.

VIA SATELLITE: Who do you see as the main consumers for OneWeb capacity? Are the natural competitors FSS operators?

Wyler: Initially, the system is focused on enabling affordable Internet access for everyone. So, the mission of the company will be to drive availability of high quality access to the market and to the tiny micro markets that are really suffering because of a lack of connectivity. I think they will have the largest life impact. There will be plenty of others markets, for sure.

I think the market is so big, that there is room for everybody. We have a long way to go to connect the world. I don’t see us directly competing with everybody. The reality is to give people options.

VIA SATELLITE: With industry verticals being served, and O3b connecting the other 3 billion people, where does OneWeb fit in to the communications landscape?

Wyler: O3b Networks does link around 150 Mbps and up, and this is about links that are much lower speeds than that. Our primary core competency will be sub 50 Mbps to small, inexpensive terminals. O3b’s core competency is in high-speed links to carrier class terminals. Both are incredibly important, and different.

VIA SATELLITE: How difficult was it to get investors like Virgin and QualComm to buy into this vision?

Wyler: The vision for connectivity was easy. Paul Jacobs, CEO of Qualcomm, and Richard Branson, founder of the Virgin Group, both super get it and really they, and everyone in their companies, believe and understand in the need for connectivity. So we are all in absolute alignment.

It was funny about Richard, I have known him for a while and, years ago, before OneWeb, I had sent an email about launching satellites via the Virgin rocket. I said: “If you can get the cost of launch down, people will launch all different types of satellites on lower budgets, and learn so much about the earth … this would be great!” It was just an encouraging email about the vision of launching low-cost satellites and the benefits they could bring. Well, now here we are!

The due diligence was tough though — Qualcomm knows more about communications chips, handover protocols and LTE then any other company. They also have a long background in satellite having built Globalstar and many other satellite communications systems. Virgin has Richard as the leader with a strong understanding in things that you can’t imagine he would have a sense about, and then this deep bench of players.

The credibility that came with O3b is definitely helpful. When people asked questions, we were able to really anticipate those questions and really have very clean answers for them. We have a heritage about understanding about constellation design and investors’ needs, and marrying our mission about accomplishing certain goals for humanity, and building a company that can raise funds and return value to investors.

VIA SATELLITE: I understand an RFP is already out regarding the manufacturer of these satellites? When do you hope to finalize this?

Wyler: We have done something unique in itself: We are building satellites at high volume. They need to be done in a production line, rather than a one-off manufacturing process. We are going into a partnership where we will own a portion of the factory and the manufacturer the other portion. Together, we will design and manufacture the satellites in volume. There are a number of companies involved there, and really enthusiastic to work with us. I think we will select the company next month.

VIA SATELLITE: Is 2017 a realistic timeframe to launch the first satellites?

Wyler: I am an optimist. I think 2017 is a realistic time to have our test satellites up. I am not saying the constellation will be working then.

Wyler: The satellite industry has relied on older technology and incredibly risk-averse viewpoints. Innovation has not been the highpoint of the satellite industry for a number of years. There will be a new world for FSS operators, and they will have to consider their vision over the next 20 years.

VIA SATELLITE: What is your long-term vision for the satellite industry?

Wyler: I think the satellite industry will continue to evolve. Small satellites are pretty special; they are really cool. As we learn more about satellites, and the environments they are flying in, we can work out what is feasible. Satellites get cheaper, and new opportunities will emerge.

VIA SATELLITE: Has there been a seachange in terms of where satellite fits into a complex communications ecosystem?

Wyler: Satellite will find its place in the ecosystem. If it finds its right niche, it will become an incredibly important part of the overall ecosystem. As far as the older models, they will probably be around for a long time, but more on an annuity basis than anything else.