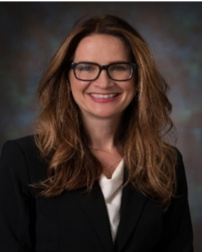 Sarah Schellpfeffer, CTO of Northrop Grumman’s Space sector, recently joined the opening general session at SATELLITE, which looked at how satellite business models and technologies are evolving in the multi-orbit ecosystem.

Schellpfeffer recently spoke with Via Satellite to continue that conversation and share insight into Northrop Grumman’s focus on space sustainability.

VIA SATELITE: One of the major topics of the opening general session was in-space sustainability. How is Northrop Grumman working on that with its Mission Extension Vehicles?

Schellpfeffer: We are really trying to transform infrastructure in space, with our capabilities with SpaceLogistics, specifically the Mission Extension Vehicle. We’re pushing the boundaries and figuring out how to do satellite servicing and logistics, and creating a new market in this space. The Mission Extension Vehicle, or MEV, is able to dock with the commercial Geosynchronous satellites, and then provides the propulsion and attitude control that’s needed to extend its life. We’re the first company to be able to do those satellite services, with two missions on orbit in the past year.

VIA SATELITE: The first MEV mission in early 2020 was a huge milestone. How are you going to expand on that capability?

Schellpfeffer: In addition to the commercial customers, we’re continuing to invest deeply and working very closely with U.S. government agencies to develop the next generation of space technologies. This is going to include robotics, high-power solar electronic propulsion, and all sorts of future services that build on the “keep it simple” approach that allowed us to have that first success.

Even eventually [this could mean] a refueling service and adaptive manufacturing on orbit. Looking at what is possible. You can extend the life of a vehicle when you have all of the means to make the types of repairs and extensions that we do for machines here on Earth, in space. That’s truly what MEV, MRV [Mission Robotic Vehicle], and MEP [Mission Extension Pods] are allowing for the satellite industry

VIA SATELITE:  You mentioned conversations with the U.S. government about mission extension. How do you see government interest in satellite servicing?

Schellpfeffer: We are partnering with various government agencies across civil and defense, and we do see interest from them in the extension of these services. It’s really using this as an opportunity to partner with the government and create a framework around safe and sustainable operations on orbit. Extending the life of a Geosynchronous vehicle is an implementation and approach to that overall sustainability question.

VIA SATELITE: Beyond satellite servicing, what are some other opportunities that you see for Northrop Grumman in the sustainability space?

Schellpfeffer: We see the opportunity to potentially clean up orbit by removing debris with these vehicles through SpaceLogistics. For example, towing non-functioning satellites to the graveyard orbit. That can reduce the clutter in active orbits and make them safer for operations over time, and allow new vehicles to enter into those orbits. Ultimately, we would like to see the development of new technologies and capabilities that are used to upgrade and recycle the satellites on orbit and re-architect their missions and allow for repurposing. That means there’s one less satellite or launch service that has to happen in order for a capability to reach space.

VIA SATELITE: Do you think that sustainability will evolve across all orbits? Small satellites in LEO don’t cost as much, so it may be cheaper for operators to de-orbit satellites than to have those satellites serviced. How do you see on-orbit servicing evolving across different orbits?

Schellpfeffer: The different orbits service different mission needs. There are things in LEO that make a lot of sense, and there are things in GEO that make a lot of sense, and make less sense in LEO. We are going to have a hybrid mix of orbits going forward. Customer and mission needs are going to put the demands in different orbits not just for sustainability reasons, but also for mission architecture reasons. I see that hybrid [environment] continuing into the future. Maybe the quantities change, but I don’t see any particular orbit dominating in terms of its utility.

VIA SATELITE: Northrop Grumman recently announced a Net Zero goal for zero greenhouse gas emissions by 2035. Do you see a synergy between sustainability here on Earth and sustainability in space?

Schellpfeffer: Yes, of course. We are taking meaningful action, based on scientific data, to reduce our carbon footprint on Earth. We are taking even more proactive steps to have a lasting impact to bring forth a safer and more sustainable world with the Net Zero greenhouse gas goals.

VIA SATELLITE:  In your role as Space CTO, do you work mainly in one area between defense, civil, and commercial, or equally across all three?

Schellpfeffer: We work across commercial, civil, and defense space markets and we work at multiple orbits in those markets. We are a company that addresses across the spectrum. As chief technology officer and Space sector vice president for all of Northrop Grumman Space, I am responsible technically for our space portfolio and the technologies and the technology development within it, across that spectrum.

VIA SATELITE: What are some of the trends you see in how customer needs for space technologies are evolving?

Schellpfeffer: We’re adapting to proliferation and the reduction in costs for development of ground systems and for the development of space systems. We are really leveraging that technology and adapting to the new requirements as they’re coming through defense acquisitions, as well as the emerging commercial market. We’re looking at how to leverage our technologies as these markets adapt and grow.

VIA SATELITE: During the opening general session you also talked about interoperability for cloud technology and ground systems and space systems. How do you see the issue of interoperability in space?

I also made that comment in respect to the evolution of ground operations and the commodification of ground terminals, and the interoperability of terminals with these systems. We have to leverage the investments in technology. The technology on the ground has to keep pace with how the satellites are evolving. As the space vehicles evolve, the ground technology has to evolve or have software capabilities introduced to be interoperable with that evolving space side.