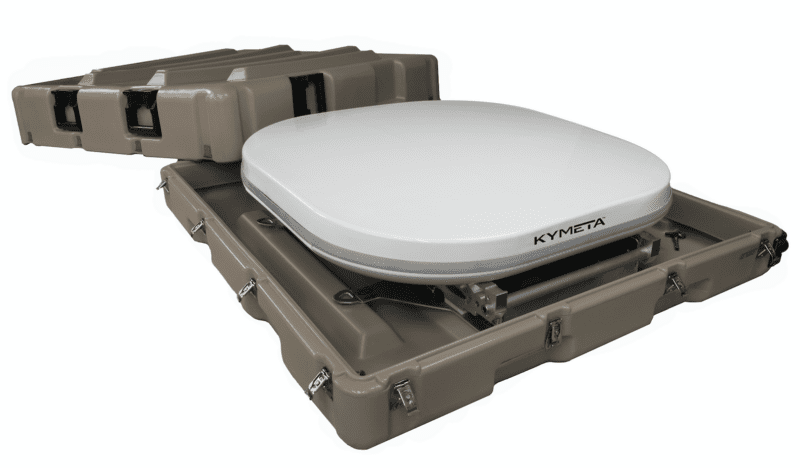 Kymeta u8 GOV terminal and u8 GO. Photo: Kymeta

Kymeta has released two new versions of its new u8 terminal — the u8 GOV and the u8 GO — in an effort to serve more government, military, and mobile end-user needs.

The u8 GOV terminal variant covers the full Ku-band spectrum and comes with an embedded iDirect 950mp modem and a FIPS, 140-2 level 3 TRANSEC module. It is being sold as a turnkey terminal with a satellite modem, cellular modem, and SD-WAN capabilities included. Kymeta said that the new design aims to meet the demands of government and military tactical users in scenarios that require secure data, voice, and video connectivity, as it is compliant with existing National Institute of Standards and Technology (NIST) security requirements.

Kymeta’s u8 GO transportable terminal comes in multiple commercial and government configurations and includes a built-in vehicle mount to support easy communications on the pause (COTP) and communications on-the-move (COTM), as well as a rugged shipping case for protection during mobile transport. The company said it has been tested against military transportation standards including MIL-STD-810H, Transit Drop, Transportation Shock, and Loose Cargo Vibration.

Kymeta launched its u8 antenna, terminal, and services line in November 2020 as a follow-up to its successful u7 product line. The new terminal pairs with Kymeta’s hybrid satellite-cellular connectivity service, Kymeta Connect, which is sold on monthly subscription plans.

Earlier this week on a Via Satellite technology webcast, Kymeta’s Chief Strategy Officer Neville Meijers, Chief Scientist Ryan Stevenson, and Vice President of Product Management Lilac Muller gave a detailed presentation about the company’s u8 terminal evolution plan and provided an in-depth look at the engineering behind the new design.