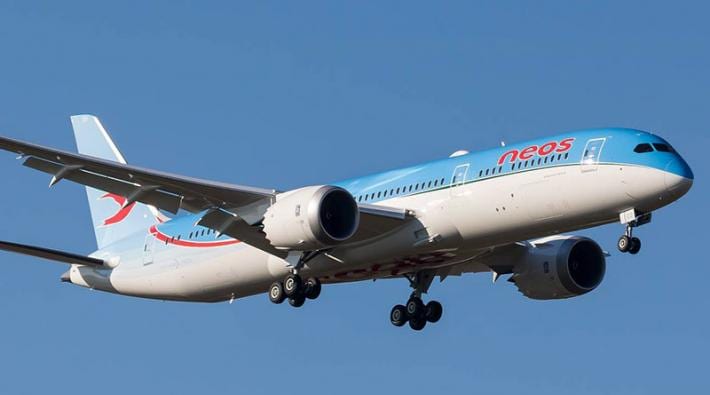 Neos, the Italian leisure airline, made headlines earlier this year when it signed a deal with Viasat to equip its fleet with the latest in In-Flight Connectivity (IFC) services. Neos Commercial Director Aldo Sarnataro told Via Satellite that the airline’s first target is to let its customers know about the service and reach. “Considering we are at first year, we are talking about new service, the main customers are family or couples, we consider a 30 percent (take-up rate) would be an excellent result,” he said. As well as using Viasat’s high-capacity communications satellite, Neos will also work with Viasat on a customized portal, giving passengers an easy interface to connect to the onboard Wi-Fi system.

The service will be available available on board Neos’s long haul fleet (B787-9 Dreamliner), and then in 2020 the airline will work on its narrowbody fleet, where the system will be installed on Neos’s new B737-8 Max planes. “We will offer the service included in the price of premium seat and economy plus seats, so, we want to enhance the value of those seats and use the Wi-Fi to incentivize the sales of the premium product. To economy guests we offer two levels of price: two hours or the entire flight,” added Sarnataro.

Neos is a relatively new airline, as it was established in 2001. The Italian leisure airline operates an all-Boeing fleet with flights to destinations in southern Europe, West, and East Africa, Indian Ocean Asia, the Caribbean and Mexico. Neos became the first Italian operator of the Boeing 787 when its first 787-9 entered service in December 2017.

Neos finished its IFC trial period this year, and launched the service at the beginning of February. “Since we are part of the major touristic group in Italy, we want to provide an high level of service to the Italian leisure market and differentiate our product thanks to service offered onboard. That’s why we decided for Ka-band system that allow passengers to surf like home,” said Sarnataro.

Is connectivity now a “must have,” even for a relatively new and small airline like Neos? “I think the answer can change according to the market,” Sarnataro said. “In Italy we are still far from such scenario, it something really new. Of course, we are betting that if you have it you can differentiate your product.”

What isn’t in dispute is that airlines are still searching for the magic formula when it comes to monetizing IFC services. These are expensive technology plans, and monetizing them has proved far from easy, even for big, established airlines. “The system is really new and we need to carefully study the user behaviour onboard. On the other side mobile and portable device are part of our daily life, so I am pretty sure people will be willing to pay to stay tuned while flying, it’s just a matter of time. We still do not have a winning strategy, we just started. We now need to collect data understand what people might need and offer them at right moment. It’s a new service and we will have to learn from our clients at the moment we are doing both, using the service to enhance premium product and asking for a fee to economy passengers,” Sarnataro said.

For Viasat, it is another deal with a major airline. Viasat already works with airlines such as JetBlue, SAS, Qantas, American Airlines among others, and has built a strong business in this area.

As for other airlines Neos has been influenced by Sarnataro said, “El Al (the Israeli airline) has a very innovative service in its new widebody and narrowbody fleet, offering three layers of service, texting, social, streaming. It is very clever because you can reach different types of users.”