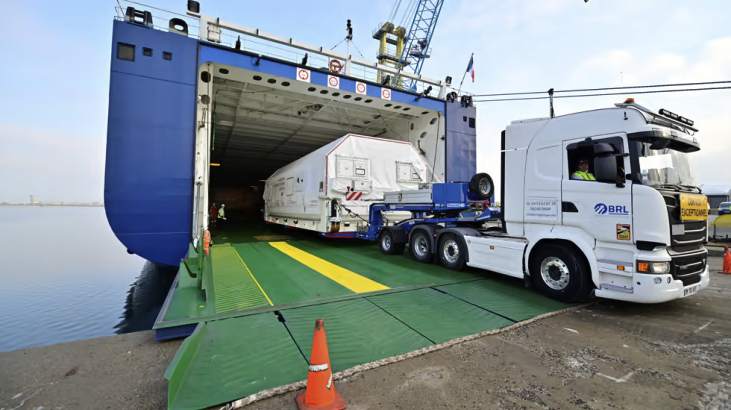 Eutelsat’s Konnect VHTS satellite is on the way to French Guiana ahead of a launch planned for Sept. 6. Arianespace will launch the satellite, built by Thales Alenia Space, on an Ariane 5 rocket from the Kourou spaceport in French Guiana.

Thursday’s news secures a planned launch date for the highly anticipated satellite that is a key part of Eutelsat’s growth plans. Eutelsat Konnect VHTS will put 500 Gbps of capacity over Europe and is the largest Geostationary (GEO) satellite ever ordered in Europe. The capacity will support Eutelsat’s growth strategy in broadband connectivity, bringing seven times the capacity of Konnect satellite, which covers Europe and Africa.

The satellite has several firmly committed customers for satellite broadband connectivity, including Orange via its Nordnet affiliate for the French coverage, Telecom Italia Mobile over Italy, and Thales Alenia Space to serve the government connectivity services.

In February, Eutelsat delayed Konnect VHTS planned entry into service from the first half of calendar year 2023 to the second half, attributing the delay to impact of manufacturing delays from the pandemic and follow-on effects, including pairing difficulties and launch rescheduling. The operator subsequently delayed its return to growth strategy until 2023-2024, pushing it back from the 2022-23 fiscal year.

“With Eutelsat Konnect VHTS, we are bringing connectivity to a next level. Defying the odds, it is the most powerful satellite to join the Eutelsat fleet. It will deliver 230 beams over Western Europe and is equipped with a digital transparent processor of fifth generation which will give a considerable advantage in terms of frequency flexibility onboard,” commented Euteslat CTO Pascal Homsy.