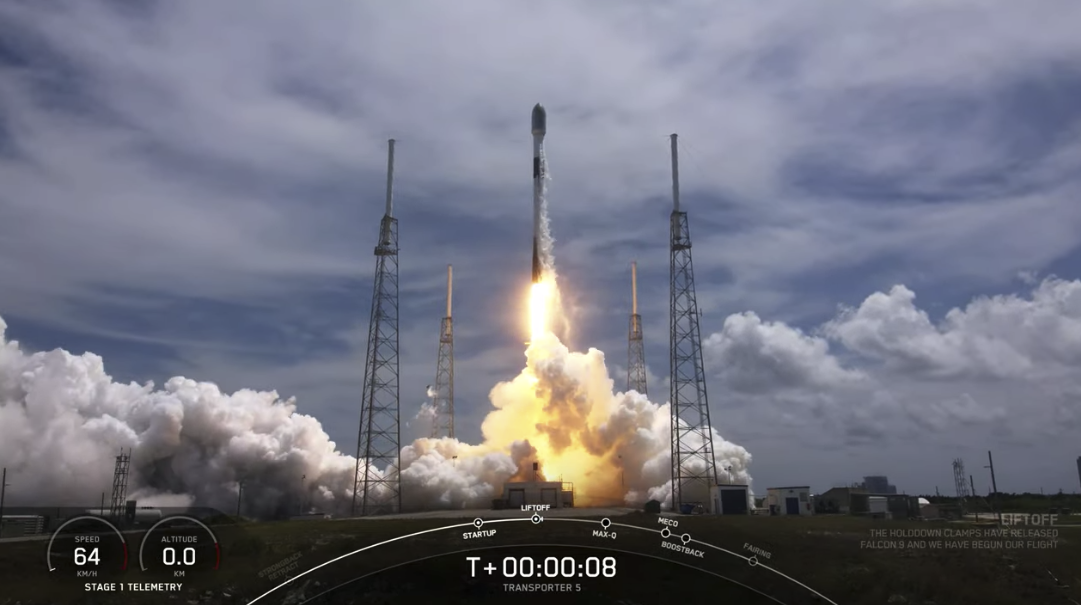 The SpaceX Transporter-5 mission on May 25, 2022. Screenshot via SpaceX.

SpaceX launched 59 spacecraft to orbit in a rideshare mission on Wednesday. The Transporter-5 mission was the fifth mission in SpaceX’s dedicated smallsat rideshare launch program.

The Falcon 9 rocket took off from Space Launch Complex 40 at Cape Canaveral Space Force Station in Florida at 2:35 p.m. ET. The first stage was successfully recovered on land.

The satellites and orbital transfer vehicles were deployed in a series of 39 deployments.  SpaceX confirmed at 4:01 p.m. that the rideshare deployment sequence was completed.

Momentus launched its first demonstration flight of the Vigoride orbital transfer vehicle, a milestone for the company after the demonstration was delayed for regulatory concerns. Momentus confirmed it placed its first customer satellite in orbit and plans to conduct more deployments in the coming days. Customers included FOSSA Systems and Orbit NTNU.

This will be the first in-orbit demonstration for Xona Space, which is developing a private global navigation satellite system (GNSS).

NASA was a customer with its CubeSat Proximity Operations Demonstration (CPOD), led by Terran Orbital and the NASA Pathfinder Technology Demonstrator 3 (PTD-3), with the TeraByte InfraRed Delivery (TBIRD) payload.

Correction: A previous version of this story provided incorrect information about Exolaunch’s customers.