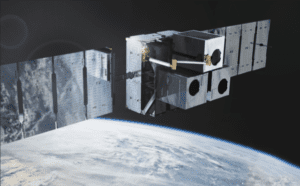 Space transportation and infrastructure services company Momentus received a license from the Federal Communications Commission (FCC) on Friday authorizing the company to use radio frequencies to communicate with its Vigoride orbital transfer vehicle, which is scheduled to launch next month on the SpaceX Transporter-5 mission.

Momentus will use radio frequencies to communicate with Vigoride while the spacecraft is in Low Earth Orbit.

This is an important debut mission for the company. While Momentus hopes to generate a small amount of revenue by taking customer payloads to space on Vigoride, the company’s primary goals are to test Vigoride in space, learn from any issues encountered, and incorporate lessons learned into future Vigoride vehicles.

“We continue to make substantial progress in working through the different regulatory processes, as shown by receipt of this license from the FCC and the license modification approvals we received on March 21, 2022, and April 27, 2022, from the National Oceanic and Atmospheric Administration [NOAA],” Momentus CEO John Rood said in a statement. “Our team remains focused on finishing late-stage preparation of the spacecraft as we look toward our first flight.”

Rood said Momentus is now working with the Federal Aviation Administration (FAA) on its application for Vigoride’s payload review, which is the final regulatory milestone the company must meet before proceeding with its first flight.