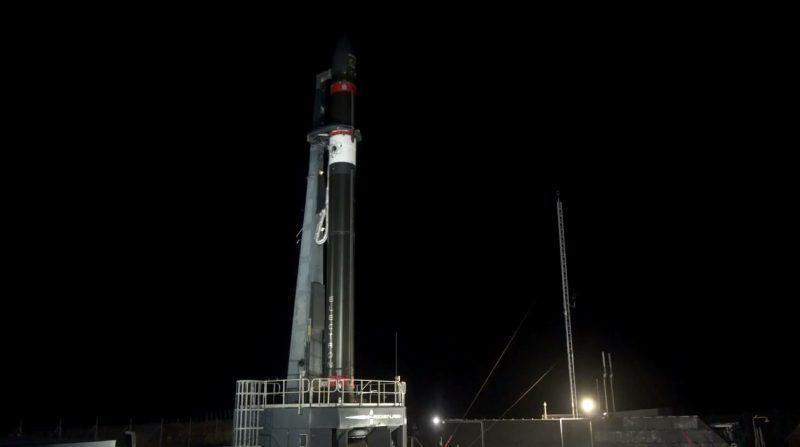 A view of the Electron rocket for the “Running Out Of Toes” mission on May 15, which failed. Photo: Rocket Lab

Rocket Lab released preliminary details after an Electron launch failure on May 15, and said data reviews suggest an engine computer detected an issue after the stage 2 engine ignited, and the computer commanded a safe shutdown.

The failure took place on May 15, during Rocket Lab’s 20th Electron mission “Running Out Of Toes,” carrying two satellites for BlackSky. Shortly after the second stage ignition the engine shut down, and the satellites were lost.

Rocket Lab issued an update on Monday and said it is leading a flight review with the Federal Aviation Administration (FAA). The company said this behavior had not been observed during ground testing, which includes multiple engine hot fires and full mission duration stage tests prior to flight. Rocket Lab expects to complete the review in the coming weeks.

“We deeply regret the loss of BlackSky’s payload and we are committed to returning to flight safely and reliably for our customers,” said Rocket Lab Founder and CEO Peter Beck. “We are methodically working through the review process to address the issue. After 17 successful missions and more than 100 satellites deployed to orbit prior to this mission, and with multiple launch vehicles currently in production, we are confident in a swift and reliable return to flight with minimal impact on our launch manifest this year.”

BlackSky CEO Brian O’Toole said in a statement that the company will continue to expand its constellation and remains on track to meet its business objectives.

“We have developed a resilient and responsive strategy for our constellation. BlackSky has additional satellites ready to deploy, as well as an active production line with more satellites on track to be delivered over the course of this year,” O’Toole said.

This was the second Electron failure in less than a year after a July 2020 launch lost satellites for Canon Electronics, Planet, and In-Space. That failure was determined to be caused by a single electrical connection with an anomaly. At the time, Beck said Electron would be an even “more reliable vehicle” moving forward because of a full vehicle assessment undertaken after that failure.

This is a setback for both Rocket Lab and BlackSky, which are both in the midst of going public through special purpose acquisition companies (SPACs). BlackSky recently signed a deal with thel launcher for launch of nine BlackSky satellites across five Electron missions in 2021, and this launch was part of that deal. The agreement was the largest number of satellites BlackSky has committed to a single launch provider.