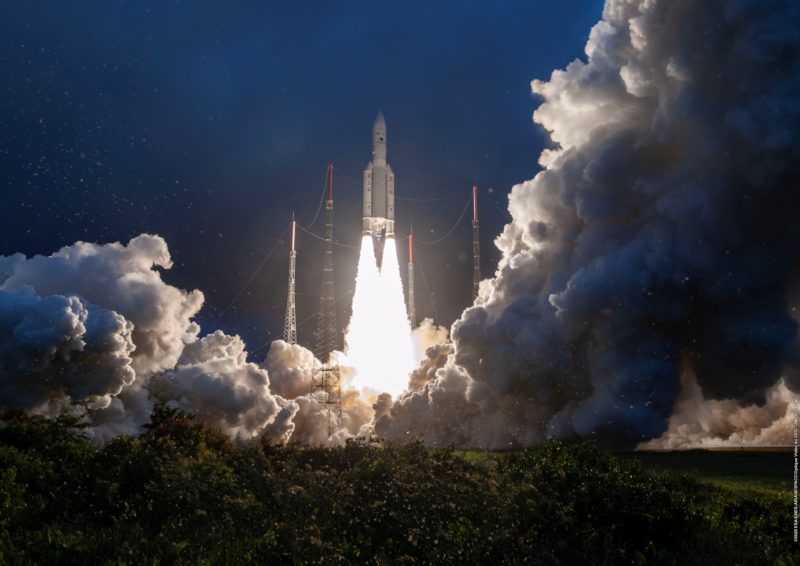 Arianespace successfully launched a dual-satellite Ariane 5 mission from French Guiana on Thursday, placing the EUTELSAT KONNECT and GSAT-30 into geostationary transfer orbit. The launch, designated Flight VA251, was Arianespace’s first of the year. It was was the 315th mission by the Arianespace launcher family and the 107th by an Ariane 5 version.

Both satellites, launched for Eutelsat and the Indian Space Research Organization (ISRO), aim to bridge the digital divide. EUTELSAT KONNECT, will serve Europe and Africa. It is also the first satellite based on the Spacebus NEO platform of Thales Alenia Space, developed with the support and expertise of European Space Agency (ESA) and the French National Centre for Space Studies (CNES). In addition, GSAT-30, designed, manufactured and operated by ISRO, aims to enhance communications on the Indian subcontinent. Its service plans to develop India by focusing on all types of space applications, including navigation, Earth observation, telecommunications, and broadcasts of educational programs, while pursuing science research and planetary exploration.

Arianespace is targeting a record mission count in 2020 – with up to 12 opportunities identified from Europe’s Spaceport in French Guiana using Ariane 5, Soyuz or Vega; along with the maiden flights of Ariane 6 and Vega C; plus eight more from the cosmodromes at Baikonur in Kazakhstan and Vostochny in Russia.

Arianespace CEO Stéphane Israël said, “More than ever, placing space at the service of a better life on Earth remains Arianespace’s primary purpose.”