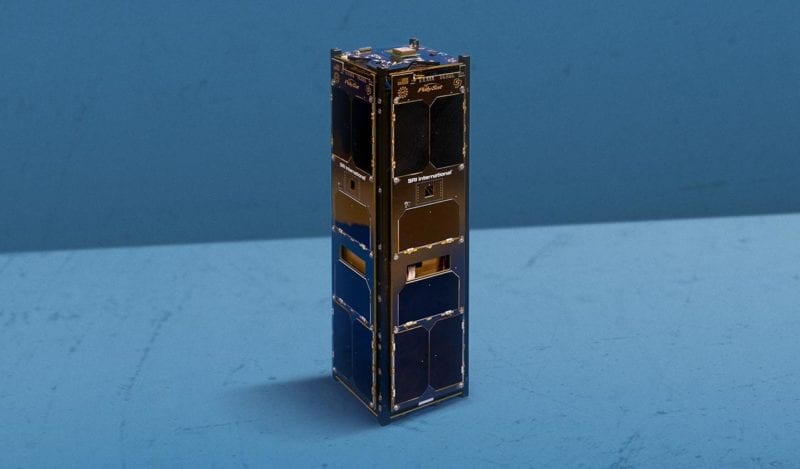 An SRI International cubesat that was launched on Dec. 15. Photo: SRI

An SRI International cubesat space-weather mission, the Ionospheric Scintillation Explorer (ISX), was launched into space on Dec. 15 as one of the payloads on the most recent Rocket Lab launch. The mission, supported by a grant from the National Science Foundation (NSF), aims to investigate regions of natural ionospheric turbulence. According to the release, these patches of disturbed ions and electrons corrupt radio transmissions and wreak havoc on essential Earth and space-based communication and navigation channels.

The ISX investigation is meant to examine thousands of Digital Terrestrial Television (DTT) channels known to penetrate the patch regions for evidence of signal corruption. Because the ground-based DTT transmitters have fixed locations and stable operating frequencies, they form a global network of signals ideally suited for imaging the internal structure of the disturbed ionospheric patches. As the ISX orbits, it will receive signals from multiple DTT transmitters to form a 3D image of emergent disturbances, an observational technique similar to a medical CAT scan.

The DTT scan technique relies on a multi-channel digital radio receiver developed at SRI International specifically for the ISX space weather mission. The design and operation of this receiver is based on two prior National Science Foundation (NSF) space weather missions, the Radio Auroral Explorers (RAX-1 and RAX-2), which discovered similar ionospheric turbulence patches driven by the aurora in Earth’s polar regions.  SRI researchers have also designed, assembled, and successfully flown radio and ultraviolet sensors on space-weather research missions for NASA, NSF, and the U.S. Air Force.