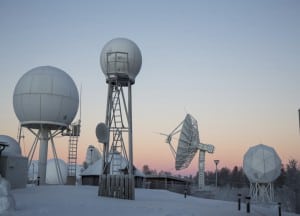 [Via Satellite 01-21-2016] Norway-based Kongsberg Satellite Services (KSAT) is adapting its ground network to cater to the growing small satellite market. The company has launched 20 ground station sites across the globe through its KSAT Lite services, which aims to reduce cost and up utility for SmallSat customers who need everything, including costs, to be, well, smaller.

“Smaller satellites are sometimes using different frequencies, such as UHF or VHF, instead of traditional S- or X-band. Some of them are flying in lower orbits so they can use smaller antenna dishes. On the other hand, there are more of them so they sometimes need more antennas. We call it the ten-times game: 10-times smaller, 10-times cheaper, 10-times faster and they are looking for 10-times lower cost,” KSAT President Rolf Skatteboe told Via Satellite.

Over the last year or so, the company noticed that the small satellite market was expanding and Skatteboe felt it was important to have a service offering that is tailored to that market and scaled to the actual requirements of SmallSat operators.

“We saw that a number of the new comers were trying use whatever technology was available,” said Skatteboe. “You don’t necessarily take the big truck out of the garage when you only need a small electric car.”

The company sat down and looked to work out what those specs might be, to standardize the system and propose a network with a common interface that would be more efficient to build. Already, lead-time to build a new site or antenna is down to about 12 months for a large system to three months for a smaller system.

“We are trying to standardize everything and simplify the interfaces. We are using 3.7-meter antennas, and sometimes 4.2 meters,” said Skatteboe, speaking to the KSAT Lite offering for SmallSats. And while the company has received skepticism surrounding the size of the antennas, KSAT finds this has been sufficient thus far to capture downlinked data from SmallSats. “Our experience is that this gives sufficient G/T margins. In general, there are a lot of margins in space and our experience is that you can get by with smaller systems than anticipated. We are encouraging our partners to standardize as well. X and S are great frequencies, but licensing might be a problem. We are suggesting Ka, but are trying to avoid UHF and VHF due to local interference.”

KSAT is now operating around 100 antennas around the world and is communicating with more than 70 satellites approximately 22,000 times every month. Skatteboe says that about one in every 10 operational contracts they have is with a SmallSat operator and they are working with around 15 to 20 small satellite users.

Currently, the company tries to support the most common SmallSat orbits by minor augmentations of the existing KSAT network, hence the stations are polar and optimized toward the International Space Station (ISS) orbits since a lot of small satellites are released from the ISS, according to Skatteboe. These tend to be around the mid-latitude There are also ground stations that offer access to pole-to-pole support for users that require more frequent access.

The company encourages customers in similar regions to share ground stations in order to cut costs. “For example, if there is a user in Australia who would like a station and one user in New Zealand who would also like to put one in, we would approach both companies and suggest they share the ground station in a location that is useful for both of them in order to save on operations costs,” explained Skatteboe.

For SmallSat customers, making the ground stations more cost effective allows them to build more ground stations as they add more satellites to their constellations, which often start out small and then scale up as their companies and missions gain speed.

“A lot of small satellites are in constellations and they start with a batch of just a few, five or 10, and then they scale up afterward. A lot of the startups would like to see that the systems are working before they deploy a full ground segment to capture all the data, so with this we can have a scalable solution for them,” Skatteboe said.

The current 20-station network is scaled to meet the requirements SmallSat customers see today. While Skatteboe anticipates that demand will continue to rise in the booming small satellite market, he doesn’t anticipate the company will see demand increasing indefinitely as steeply as it is has in the past year.

“There are a number of players out there that have proposals for quite a number of satellites, but we anticipate there will be a consolidation in the market,” he said. “While some of these companies will certainly be around, this seems to be something of a ‘satellite bubble,’ which you can compare to the Dot Com bubble, where Silicon Valley took off in the Dot Com age and while some Web companies are still around, some disappeared.”

For now, the company is looking to put as many satellites as possible on the existing network to help keep costs down, but is looking to future advancements in automation in order to cater to the long-term SmallSat market.

“You cannot have extensive human interaction when you schedule hundreds of satellites. Then the machines have to communicate,” said Skatteboe.