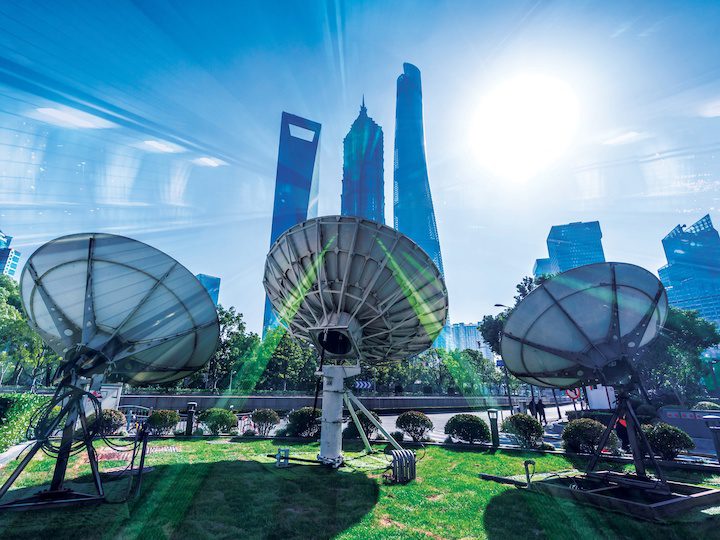 Two separate groups that have been working on open standards in satellite ground technology are joining together, bringing their open standards work under one roof. The Digital IF Interoperability Consortium (DIFI) and the Digital Interface Standards Working Group (DIS) jointly announced on Wednesday that DIFI will consolidate the seven members of DIS within the consortium. This consolidation advances the breadth of industry representation working together for common satcom interoperability standards.

This development comes after both groups put out public calls in September for an interoperability standard for space and ground system networks. Both groups were formed to establish an interoperable digital interface/Radio Frequency (IF/RF) standard based on digital radio standard VITA 49.2, which is well adopted by the industry.

The DIFI standard, ‘IEEE-ISTO Std 4900-2021: Digital IF Interoperability Standard, v1.0’, generally available since August of this year, has been approved by DIFI’s board of directors and already has been specified in at least one U.S. Department of Defense RFP. Moving forward, members will work to extend, adapt, improve, and certify the current version 1.0. This work will continue for as long as the technology and use cases evolve.

Frederik Simoens, CTO of ST Engineering iDirect told Via Satellite that the combination makes sense, as both groups had similar goals. Players in both organizations realized that having different standards would not help the goal of getting to interoperability.

“Both parties immediately agreed that it doesn’t make sense to have two standards. Additionally, when we looked at how the draft standards were being created in those two bodies, they were actually very similar. It made perfect sense for the groups to merge,” Simoens said.

DIFI and DIS were originally looking at the problem from slightly different angles. “For example, DIS was looking at standardizing the interface for different scenarios such as [Single Channel Per Carrier] SCPC and [Time-Division Multiple Access] TDMA type of carriers,” Simoens said. “A goal for 2022 is to make sure that the standard covers all types of different use cases that are needed in satellite communication, and also to do some demonstrations around interoperability. We want to show that the standard actually works by carrying out some proof of concepts and some demos where we actually connect the modem supporting that interface to a [Block Upconverter] BUC or [Low-Noise Block Downconverter] LNB, for example, to showcase that we can achieve that interoperability goal.”

Simoens said the fact that these two groups came about at the same moment with a similar idea just demonstrates the importance that the industry places on such a standard. He believes the combination of DIFI/DIS will enable modem technology providers and Radio Frequency (RF) manufacturers to move toward a single standard that will enable them to make interoperable products. “This is the end goal. The fact that two standardization bodies were formed at the same moment in time just shows that there is a strong need for this,” he said.

Tom Cox, vice president of Business Development & Sales for Wavestream told Via Satellite that neither group had any intention of creating competing standards – as this would defeat the purpose of both working groups. Discussions on how to combine their efforts began only a few days after the public announcements.

“Strangely, these two groups formed without knowing the other existed. Each group had essentially identical goals: the development of an open digital interface standard to replace the aging analog L-band standard that presently is used to link modems and RF equipment,” he said. “Both groups started with a small founding group that would make initial progress in defining an open interoperability standard prior to inviting broad participation by the industry. While neither group knew of the other’s existence until shortly before the public announcements, there was never any intention for these groups to be competitive in any way.”

Cox said the two groups demonstrated a great deal of pent-up interest among the user community and manufacturing community to move toward a modern digital standard.

“At DIS, we were certainly surprised when we saw the press release about DIFI,” he said. It was definitely a strange moment, but we reminded ourselves that our efforts were meant to create an industry-wide change, and so long as the two groups unify their efforts it only meant there was more demand for what we were doing than even we understood.”

Stuart Daughtridge, chairman of DIFI and senior vice president for Advanced Technologies at Kratos, was another key player behind the scenes. He said that many people, companies, and organizations in the satellite industry recognize the growing importance of interoperability.

Daughtridge said DIFI’s mission is to focus on the larger issue of the digital transformation of space, satellite, and related industries. “Standards are just a tool to achieve that, and it’s why our members come from across all aspects and sectors of the space industry. We are working to build common standards that address universal needs — including the requirements of the networks we connect into.”

He said the important thing about interoperability for the satellite industry is not just that there are some problems within unique systems that should be standardized, it is that those standards must conform to, or at least be compatible with, standards that have become de facto across the world’s networks.

“Statistics show that we represent about 1% of the services delivered over those global networks. Standards are the very first step if we want to grow that share, and I think much of the industry recognizes that. Many also realize that if we don’t, our services will become less and less relevant as they explore other options,” Daughtridge said.

Leaders in the industry say there has definitely been a change in attitude among ground segment players toward these standards. Greg Quiggle, vice president of Product Management at Kratos said: “At Kratos we are seeing tremendous acceptance of the need for digitizing the ground and everyone we’ve talked to already understands that to achieve their goals the systems must interoperate seamlessly end-to-end.”

Simoens believes what is different now is that there is a clear benefit to standardizing. In the past, the benefit was not really evident, because Very Small Aperture Terminal (VSAT) systems could be managed as standalone systems.

“Today, this is changing because some of the terrestrial standards are now becoming dominant, such as the 5G and the MEF standards,” he said. “There’s also a strong push from our customers to become aligned with those standards. This will allow them to integrate satellite communication systems into an existing terrestrial environment rather than having to manage the satellite communication system as something on the side with its own proprietary APIs and interfaces. We are making a very strong push to integrate satellite systems into an ecosystem which is completely converging towards one standard — mainly driven by 3GPP/5G.”

Daughtridge also believes things are changing. “We used to think, for example, that because our systems were air-gapped, they were secure. Hackers demolished that idea and we’ve seen the cybersecurity of our space systems evolving and improving as a result,” he said. “As other industries have realized, there are no islands of technology. Space and satellites are increasingly recognized as one piece of the world’s global network infrastructure.”

This breakthrough from DIFI/DIS is also great news for operators. Carmel Ortiz, vice president of Systems Innovation for Intelsat said standardization is critical to eliminate vendor lock-in and allow for a more robust supplier ecosystem in this domain.

When looking at why it has taken the industry a while to get to this stage, she said that in the past, the size of the satellite industry was a barrier to developing open standards — the quantities were not always there to justify the investment.

“There is now a macro trend toward convergence of satellite and terrestrial networks which will greatly expand the supplier ecosystem for our industry, allowing us to adopt standards that have already been deployed at scale in adjacent industries,” Ortiz said. “DIFI’s membership reflects this convergence; our members represent a broad spectrum of technologies and include equipment manufacturers, operators, as well as government and non-profit organizations. This diversity, and the level of engagement we’ve seen in the short time we have been established, bodes well for the future of open standards.”

She believes the satellite ecosystem will be fully on board when it realizes that the waveforms or proprietary systems are not what is going to make money in the future. Customer experience and ease of use will drive revenue.

“It is hard to ignore how open standards in the terrestrial and wireless industries provide benefits in choice, scale, and interoperability. We understand that we can leverage those technologies for our industry as well, become part of a single, larger industry. We are also seeing a shift in attitudes in the traditional satellite industry supply chain, they are not yet 100% there, but next generation products are beginning to incorporate more open standards.”

The satellite industry is in a period of rapid change. More satellites are going up than ever before, and more money is being invested to bring connectivity to remote communities, planes, trains, and ships. The development of open standards could have massive implications for the industry over the next few years.

Simoens said satellite players are becoming connectivity players that must also look to use other communication technologies. The New Space revolution requires a much tighter integration between the ground and space segment.

“That tighter integration is also a big driver for convergence and for standardization. Then you also have the cloud, where we also see convergence in the sense that we’re moving away from using very dedicated proprietary hardware to more generic cloud platforms. That cloud infrastructure layer also imposes some standardization because it tells you how you need to develop your technologies to run on it. It’s critical that we align our technologies with industry practices now,” he said.

Satellite operators see themselves as more than just satellite companies. Simoens said a lot of ST Engineering iDirect’s customers are not just focusing on pure satellite communication, but on offering a connectivity service to their customers.

“Service Providers want to offer a complete package to their customers. But they want to have a system that can be integrated, or that can be managed as one, whether that has a satellite component or terrestrial component. From that perspective, it’s very important to align the operations and management of those systems,” Simoens added.

Cox said in 2022, DIFI must show the demonstration of hardware that conforms to the standard. This will be required to promote adoption.

“Users want to know that there will be a wide portfolio of compatible products, and manufacturers want to know that there are users interested in procuring what they build. The industry will have to go through a confidence-building stage for both groups, and we believe this will center on hardware demonstrations,” he said.  “We also fully expect that in application to real-life use cases, we will uncover the need to refine the standard.”

Big picture, Cox said it is DIFI’s hope to refine the existing standard and extend it to additional use cases like symbol stream transmission during 2022, with additional proof of concept hardware demonstrations. Initial products may be available for procurement by the end of 2023. Based on the historical adoption of the L-band interface, Cox said it will take about five years before the digital interface largely supplants the L-band interface.