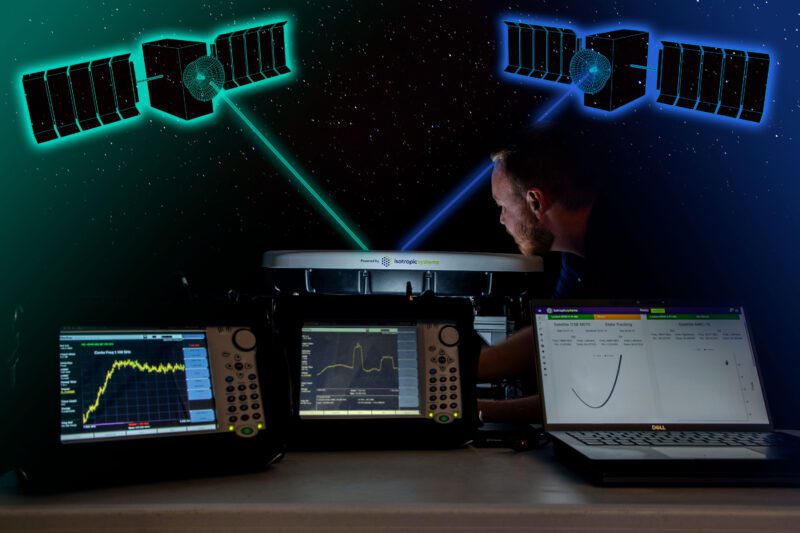 Isotropic Systems reported Tuesday that the company’s terminal linked to a Geostationary Orbit (GEO) satellite while simultaneously connected with a Medium-Earth Orbit (MEO) satellite during tests with SES.

This is validation of Isotropic Systems’s optical beamforming technology that has been in development for years. The company says this demonstration makes satellite connectivity more attractive to defense and civil customers for land, air, and sea applications.

The multi-link antenna was tested on Oct. 22 at the SES World Media Port in Manassas, Virginia, and replicated over the past week. The company reported the terminal established multiple simultaneous, full-performance link connections with an SES satellite in GEO and an O3b satellite in MEO. A live Microsoft Teams call was delivered over simultaneous satellite links.

“We have field-proven the claim that our multi-link application is a true multiplication of existing antenna performance, times the number of links that you want from the terminal, and you can have as many as you want,” Isotropic Systems Co-Founder and CEO John Finney told Via Satellite on Tuesday. “It’s what we call true multi-beam, there are no trade-offs or no compromises.”

The engineers behind the demonstration even got emotional over the milestone, said Chief Marketing Officer Brian Billman, who was present for the test.

“This is basically eight years in the making. To have it finally be out there and field-proven over live satellites, [there’s] nothing more exhilarating than that,” Billman said. “You don’t see [engineers] too emotional too often. But at that moment, there was a lot of excitement, they were jumping around. Then you know it’s big.”

Finney said this will allow end users from defense, governments, and enterprise to take advantage of the vast amount of satellite capacity coming available in the next few years from Non-Geostationary Orbit (NGSO) constellations. Isotropic has worked with every major satellite operator to design the antenna as both forward and backward compatible with satellite systems. End users will be able to connect to multiple operators’ satellites at the same time with this antenna.

He gave an example of a defense use case, if a satellite is disrupted for military communications on a mobility vehicle, communication would not be lost with an Isotropic antenna because there will always be multiple satellite connections at the same time. This antenna could also be used as the sole satellite antenna on an airplane for both crew communications and passenger entertainment.

Finney said Isotropic plans to commercially launch the antenna in the summer of 2022 and is expanding its team globally and in the United Kingdom over the next year to support scaling manufacturing, services and support, and sales.

SES CEO Steve Collar and longtime business partner of Finney said these trials open the door to new multi-orbit service delivery with SES assets in GEO and the upcoming O3b mPOWER system. SES is also an investor into Isotropic and led the company’s financing round earlier this year.

“Isotropic’s unique architecture enables our customers to be connected to multiple simultaneous beams from both GEO and MEO satellites, enabling us to deliver industry-defining performance and orbital resilience services. It is a game changer for resilient, secure, global networks,” Collar said.