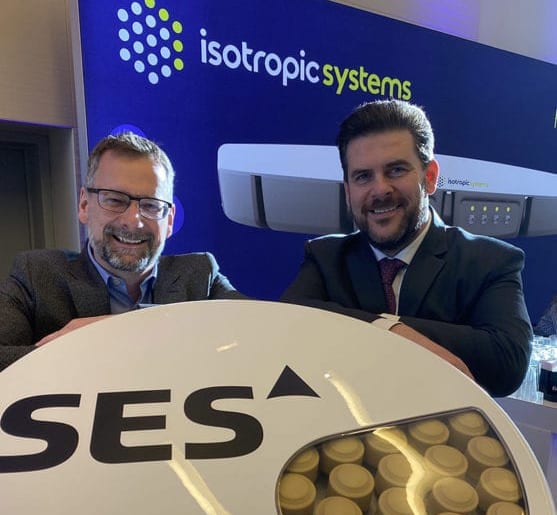 The global operator led the financing round, which included grant funding support from UK Government’s Future Fund, as well as contributions from Orbital Ventures, Firmament Ventures, Space Angels, and Boeing HorizonX Ventures, which led a $14 million financing round for Isotropic in 2019

Finney established Isotropic Systems in 2013 following his time as CCO and founding member of O3b, where he worked with then O3b CEO Steve Collar. The two CEOs continue to work together on ground systems technology projects and have multiple shared contracts to deliver services and terminals.

Isotropic Systems is developing a multi-service, low power, integrated high-throughput satellite terminal designed to support customers and business in new markets. With the $40 million financing in place, the company plans to open a 20,000 square-foot technology and testing facility near its current headquarters in Reading, U.K., and will hire an additional 150 engineers during the next two years.

Isotropic Systems said the funding would also allow it to accelerate development and roll-out of its phase one terminal expected early 2022. “With multiple new space constellations being launched by organizations including OneWeb, Inmarsat, Intelsat, SpaceX, Amazon, SES and Telesat, innovation in space needs to be matched by innovation on the ground and air,” Isotropic said in a company statement.

Collar of SES added: “Isotropic’s multi-beam antenna plays an important role in our multi-orbit strategy and is a key enabler for advanced satellite services on land, in the air and at sea. Our investment reflects the potential that we believe this breakthrough technology has for SES and for the industry as a whole.”