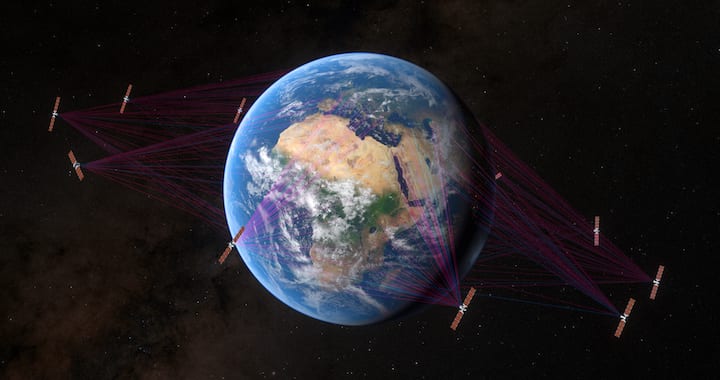 While there is always huge excitement around new satellites and new capabilities in space, the drive to create improved and more efficient ground infrastructure is also coming sharply into focus. On Wednesday, SES announced agreements with key infrastructure service providers around the world to build its eight initial O3b mPOWER satellite ground stations. Construction has already started on these advanced technology satellite ground stations, which will become operational in the second half of this year. The eight sites will provide telemetry, tracking and control capabilities to enable SES’s management of the Medium-Earth Orbit (MEO) constellation.

Two of the satellite ground stations are located at Dubbo, NSW, Australia (operated by Pivotel) and Thermopylae, Greece (operated by OTE). Other locations include Merredin in Perth, Australia; Phoenix, Arizona; Chile; the United Arab Emirates; Senegal, as well as SES’s own satellite ground station in Hawaii. Four out of the eight sites will be co-located and operated with Microsoft’s Azure data centres.

In this interview with Via Satellite, Stewart Sanders, executive vice president of Technology and O3b mPOWER program manager at SES, talks about why his company is investing millions of euros to create the ground network of its future. 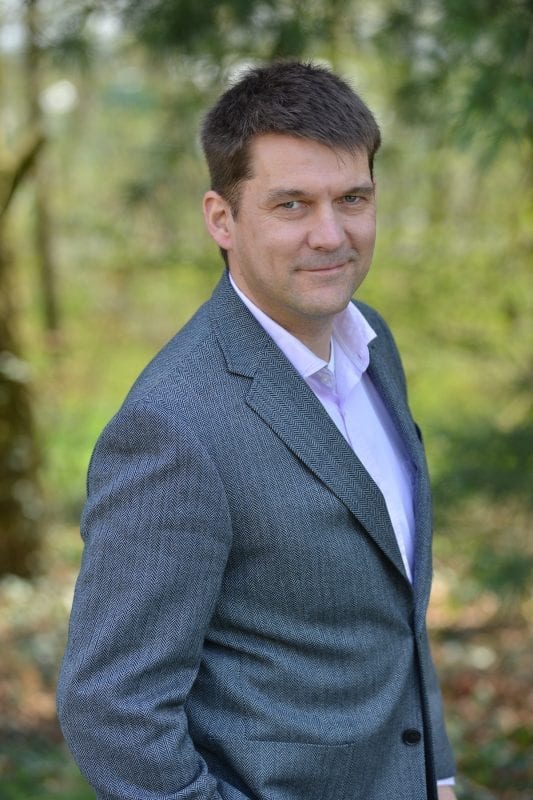 VIA SATELLITE: What is the significance of this announcement?

Sanders: With the first batch of O3b mPOWER satellites launching in the third quarter of 2021, we are excited to announce the ground stations or gateways’ location around the world. These are eight key gateways that are used for command and controlling the constellation as well as being data gateways. Additionally, four will be co-located with Microsoft data centers to further enrich the connectivity and customer experience.

However, this doesn’t mean that these are the only gateways of O3b mPOWER, others will be announced later on. The concept of O3b mPOWER gateways changes significantly since O3b mPOWER satellites have fully digitized payloads and full beam-forming capabilities. The flexibility in the O3b mPOWER payload is such that any point can be connected to any point within the field of view of the satellite hence, any endpoint can also potentially be a gateway if the service provision requires it.

VIA SATELLITE: How big of an investment is this for SES? What were the unique technical challenges when looking to build this infrastructure?

Sanders: We don’t reveal investment details of our ground stations, but it is running into double-digit millions of euros. The O3b mPOWER gateways are different from pure data gateways. Unlike the latter, where you would just build gateways to provide customer support or be connected or other infrastructure, the O3b mPOWER gateways are also intended for TT&C purposes. This means that the gateways have to be located strategically, so that we can maintain command and control of the O3b mPOWER satellites. Given the dynamic nature of the O3b mPOWER satellites where we can reconfigure the satellites flexibly to meet customer needs, the placement of these gateways needed to be a fairly exacting process. We made sure we had alternate choices for every single one, and looked at various aspects such as the partner and companies that we are working with; location, partnership history, infrastructure, pricing, connectivity to fiber, costs of the fiber etc. All of these are factors that we took into consideration when making our choice.

VIA SATELLITE: How many partners are you working with on the project?

Sanders: We are announcing eight gateway locations, one of which is on our own teleport. This means that we are working with seven different partners and will be using their facility to host our O3b mPOWER antennas. Pivotel and OTE have been announced in the last couple of months, and the other partners will be announced in due time over the next couple of months.

VIA SATELLITE: You mentioned that some telcos may want to have their own O3b mPOWER ground station. When are you likely to announce these deals?

Sanders: There has been some real interest from our customers who are keen to have their own O3b mPOWER gateways. Once those are finalized, we will be talking about them publicly.

Depending on what the telco customers are asking for, the gateways could be as large as what we are announcing now for the TT&C gateways, but could also be as small as whatever the customers’ needs are. We don’t necessarily need to bring a 5.5-meter antenna all the time. It can be smaller and include mobile gateways.

This is different from our existing O3b constellation. O3b, operational since 2014, has been leading the world in terms of NGSO [Non-Geostationary Orbit] performance with low latency, high throughput. However, given the build of the satellite, we are relatively constrained on how we land the data. Of the 10 user beams, five of the beams go back to one gateway and other five back to another gateway beam, so the landing locations of the gateway beams were determined prior to service launch and remain so. This is different from O3b mPOWER where there is much more flexibility. We can simultaneously connect an end point to one of our gateways, to a customer gateway, back to another user terminal – all at the same time, depending on what a customer needs. We can dynamically change that connectivity as needed.

Telcos aside, government customers are also finding it interesting that they will soon be able to land their data at their own O3b mPOWER gateway on their own network. Having a separate ground infrastructure gateway and being able to tap into secure O3b mPOWER connectivity services to offer a compelling, and differentiated low-latency, high throughput services in a secure environment as if it were their own satellite infrastructure is very attractive to the government customers.

VIA SATELLITE: Do you believe the ground tech is keeping up with operator’s ambitions?

Sanders: Technology advancements come in spurts. Some five years ago, satellite technology wasn’t as progressive as ground infrastructure and the latter was ahead of satellite, e.g. in use techniques to improve link efficiency through improved modem efficiency and carrier in carrier. However, we are now at the point where things such as satellite digitized payloads and electronic beam-forming capabilities are optimizing the performance of the satellites, and we are seeing that the ground infrastructure needs to step up, for instance in the provision of flat panel antennas.

Having said that, through our work with ST Engineering iDirect and Gilat on their next-generation modems, we are seeing a lot of features that have not been brought to market before in terms of capability, e.g. low signal to noise performance.

Likewise, for the use of carbon fiber in the O3b mPOWER gateway antenna design; while it sounds fairly obvious, it was previously not been done at scale. Carbon fiber is more rigid and repeatable yet lightweight; installation is simplified because, for instance, one doesn’t need to perform photogrammetry in the field and because it is lightweight, the drive motors can be smaller and therefore reduce costs. This is a new use fairly rudimentary technology, even though it is a well-understood technology.

In other areas, there are a lot of terrestrial capabilities that will be new to the satellite market. As announced previously, SES is looking to connect data centers through to next generation space architecture and leveraging open standards such as ONAP that are being used in the terrestrial sphere, but not so much in the satellite sphere. The end result is that we will support the orchestration of services across the satellite network, something not done before. It is important to note that software is a key component of the overall O3b mPOWER architecture. I did a quick total last week, and we have 28 major software components to enable O3b mPOWER infrastructure, a combination of vendor partner and in-house sourcing.

Our O3b mPOWER partners whom we are working very closely understand our vision of an open system and we firmly believe it’s only a matter of time before ground tech catches up with space tech in the latest technology spurt.

VIA SATELLITE: How important is the fact you are co-located with Microsoft Azure data centers for a number of these sites? Why only half the sites?

Sanders: Having four out of our eight TT&C gateways collocated with Microsoft Azure data centers illustrates the deep partnership we have with Microsoft. Microsoft understands that in order for their customers to be able to enjoy a seamless cloud experience, high-performance networks need to be easily accessed. Through the co-location of Microsoft’s data centers with SES O3b mPOWER gateways, the one-hop connectivity is offering customers improved experience, extending cloud to the edge of the networks. Nonetheless, all our eight gateways can perform the range of services, networking and multi-cloud access for our customers.

VIA SATELLITE: What do you see as the challenges facing the ground segment technology players over the next few years as operators like SES pursue aggressive satellite rollout strategies?

Sanders: It’s fair to say that SES is coming from a different place. Unlike many others in the market, SES’s Medium-Earth Orbit (MEO) constellation isn’t aggressive. We are not coming to market with hundreds of thousands of satellites. Instead we are launching as few as six satellites to provide global coverage at first which makes the constellation an achievable and CapEx-efficient business case.

There is a big difference between how we are working with vendors and how some of the LEO operators are working with vendors. Through experience, we have learned that it’s important to make sure that we have redundant suppliers for key pieces of equipment. So it’s deliberate that when we chose ST Engineering iDirect and Gilat, we chose for some overlapping performance, but also for flexibility and importantly redundancy in the solutions. We are doing that with all of the other hardware components. It appears that some of the LEO solutions are focused on using their scale to overcome the risk of limited choice in vendors but these are new technologies and will be prone to systemic issues in a way that more traditional hardware leverage isn’t.

Having said that, the satellite industry is a very cooperative industry. We have pointedly avoided vendor technology exclusivity agreements in order to enable situations where our vendors have volume from multiple customers, including our competitors. This technology overlap and of the usage, the experience, and the volume ultimately benefits us, our customers and their end-users.