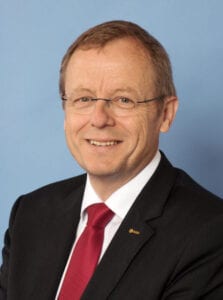 European Space Agency (ESA) Director General Jan Woerner has decided to step down from his position at the end of February, a few months before the end of his term, to let successor Josef Aschbacher take the helm.

Woerner, who has served as director general since 2015, first announced in February 2020 that he would not seek another term. In December, ESA announced that Aschbacher, currently director of Earth Observation Programs, would take over in July 2021.

Woerner wrote in a blog published Jan. 8, that he made his decision because of Aschbacher’s position in ESA, the timing until ESA Council at ministerial level in 2022, and negotiations with the European Union on the Financial Framework Partnership Agreement (FFPA).

“As I’ve said before, I consider it to be the most extraordinary job and a real privilege to be able to do it,” Woerner wrote. But also, ESA is a very special organisation filled with a great many brilliant and highly dedicated people. People who, together with our member states and industry, have consistently over many years achieved many great things. Of course, I will miss it.”

Woerner said he will return to his professional background in civil engineering. He has spent more than 25 years leading public institutions and was previously head of the German delegation to ESA, and chairman of the ESA Council.