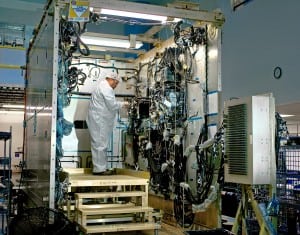 [Via Satellite 05-12-2015] Harris Corporation has successfully completed the final two tests of the ground segment of the National Oceanic and Atmospheric Administration‘s (NOAA) Geostationary Operational Environmental Satellite – R Series (GOES-R). The ground system is now ready for use by NOAA as it prepares for the GOES-R satellite launch in March 2016, with Harris providing training and operations support.

Once launched, the GOES-R satellite, the first of the series, will be a primary tool for detecting and tracking hurricanes and other severe weather in the Western Hemisphere, reducing risks to lives and property. The ground system is an enterprise-wide network backbone, which will ingest, process and distribute 40 times more data to the NWS than current systems and to more than 10,000 other direct users. It also will provide command and control of the GOES-R constellation of satellites and their onboard instruments.

Harris is the prime contractor and systems integrator for the GOES-R Series ground segment, which includes 2,100 servers, 149 racks of network equipment, 317 workstations and storage services totaling three petabytes. The system also contains 454 blade servers for product processing and distribution across all environments, delivering approximately 40 trillion floating-point operations per second of processing power. In addition, the GOES-R ground segment architecture has a flexible design that will support additional requirements in the future.