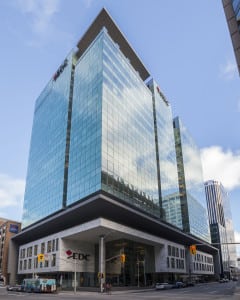 [Via Satellite 04-17-2015] Export Development Canada’s (EDC’s) recent financing of Hispasat’s Amazonas 5 satellite could be a signal of greater activity within the nation’s satellite industry. On March 30 the Canadian Export Credit Agency (ECA) agreed to fund approximately $149 million for the Amazonas 5, which MacDonald Dettwiler and Associates’ (MDA) subsidiary Space Systems Loral (SSL) is building. EDC funded the program to support the Canadian space industry, which it sees growing in international clout.

“The satellite sector in particular is a capital-intensive business, especially on the manufacturing side and the operating side; so financing is a key lever in that sector,” EDC Strategic Account Executive John Earl told Via Satellite. “What we are observing is more ECA activity in the satellite financing space, so making sure that Canadian companies in that space can compete on a level playing field with global operators is something we want to make sure happens.”

Earl said EDC seeks to support Canada’s space industry with both funding and other financial services. The effects, he said, trickle down from the large players, such as MDA and Telesat, to smaller Canadian companies in the industry.

“There’s a large ecosystem of sub-suppliers within the Canadian satellite sector that are doing good work, but you may not hear about them. We may support them through our financing tools, risk management tools and informational services,” he said.

Governments have historically used ECAs to assist national economies in tapping international markets, and the satellite industry has grown in prominence within their focus. The United States Export-Import Bank (Ex-Im bank) is one of the most notable, and has referred to the satellite industry as one of its most important sectors.

“In developed markets, ECAs have long been viewed as a way to help the domestic economy while improving international relations, and in the satellite industry this would be no different,” Blaine Curcio, senior analyst at NSR, told Via Satellite. “In recent years it has become somewhat more robust in terms of its involvement in the satellite industry, with increasing competition from China and others in terms of satellite manufacturing making it somewhat more difficult for U.S. manufacturers to be price competitive, especially at the lower end of the market.”

In addition to the two Hispasat contracts, the Canadian EDC also financed a Spacecom deal in 2013, and a complete communication satellite system for the National Space Agency of Ukraine (NSAU) in 2009, which included the manufacture and launch of a satellite along with the production of two satellite control centers and related ground infrastructure.

Curcio noted that ECAs’ support is important to the satellite industry, but argues that it has become somewhat less important over the past several years — at least in developed markets — because of cheap credit elsewhere. He also highlighted that easy access to credit could influence more atypical business plans such as the many recent large constellation announcements.

EDC operates very differently from the U.S.’ Ex-Im bank — the fate of which has been jeopardized by political disagreements. The Canadian ECA is self-financed and acts at an arm’s length to the government as a crown corporation. Earl said it is difficult to put a number to the amount EDC has provided to finance the satellite industry in Canada because the agency supports several technology-heavy companies that sometimes overlap. Still, it is an area of increased focus for the organization.

“I think our exposure to this industry is growing. We are building a portfolio of loans and I expect more loans in this space going forward,” he said.