Next Starlink Satellites Will Have Inter-Satellite Links, Shotwell Says 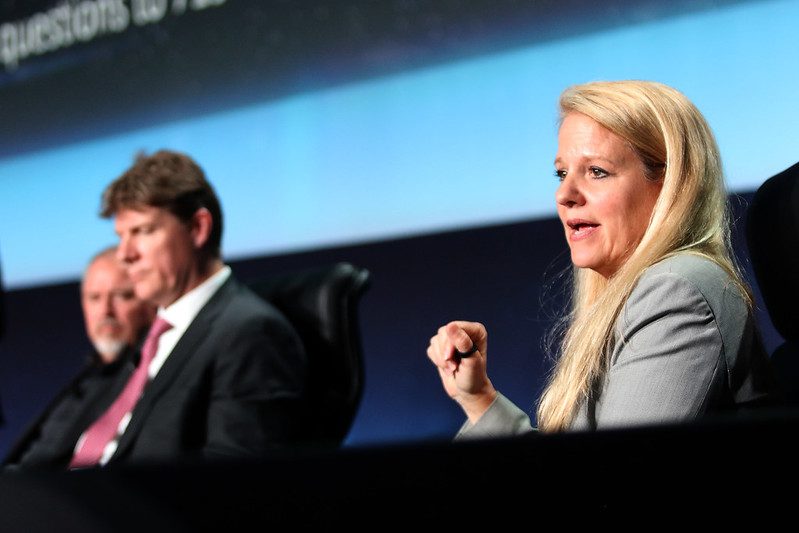 Inter-satellite links are the future of satellite data transmission. This was one point that leaders across the space and satellite value chain could agree on while speaking Tuesday at Space Symposium in Colorado.

SpaceX COO Gwynne Shotwell said that every Starlink satellite that is launched in the future will be equipped with laser terminals, starting with the next launch in about three weeks.

“We’re flying a number of laser terminals right now in space, and we’re working on probably our third generation now,” Shotwell said. “In fact, that’s why we haven’t flown Starlink for weeks, because we wanted the next set to have the laser terminals on them.”

Shotwell also commented on the economics of the laser terminals: “It is [expensive], although … our terminals are far less expensive than those that we surveyed. Anything you add to that satellite is expensive, but when you pack 60 of them together and throw them on one reusable launch vehicle, the economics are pretty favorable for us.”

Viasat Executive Chairman Mark Dankberg said space-to-space applications are among the most exciting new developments in the industry. “If you look at Earth Observation [EO] of all types, the ability to do rapid relay over oceans where ground stations are inaccessible, there’s a lot of opportunity there,” Dankberg said. “It’s one of the things we’re working on both with our government customers and commercial installations.”

Dr. Fred Kennedy, president of in-space transportation company Momentus, called affordable optical links in space “the most important thing we can do.”

“A low cost, optical head is something someone ought to do. That’s going to build out peripheral capabilities [for constellations]. That’s going to make this all get very interesting, very fast,” Kennedy said.

The return on investment for satellite systems depends on more than the cost of the satellite in space — the user terminal is a crucial piece as well, and one that is hotly debated.

OneWeb CEO Neil Masterson appeared on the panel on the same day that OneWeb unveiled a user terminal with Intellian Technologies and Collins Aerospace that is about the size of a briefcase. The terminal, OW1, is an electronically steered antenna designed to receive OneWeb’s high-speed internet connectivity for global businesses, governments, and communities in both populated and remote locations.

Masterson declined to give a price point for what some are calling the “pizza box” terminal, but said the price is competitive.

“It’s still not cheap enough,” Masterson said. “We expect to see some more progress there and we are working with the industry as a whole. We’re delighted with our partnership with Intellian, and we also expect to be discussing with other terminal suppliers to get scale behind this. We’ll refine it as we go and make sure the cost comes down.”

Shotwell said that SpaceX is still losing money with every customer acquisition because it is subsidizing the cost of the user terminal. A year from now, the cost to SpaceX may be only a quarter of what it is now, she said.

Shotwell and Masterson also addressed the issue of government subsidies for satellite internet. SpaceX won nearly $1 billion in the FCC’s Rural Digital Opportunity Fund to connect remote sites in the United States, and OneWeb has received major backing from the United Kingdom government in the form of an investment.

Yet “subsidies are not critical to our business,” Shotwell said, stating that Starlink is a viable business without federal subsidies.

“I would love for the subsidies to go in the hands of the consumers and let the consumers decide which service they want to buy, as opposed to subsidizing the operators and providers,” she said. “That’s really when you’re going to figure out the winners and the losers.”

Masterson agreed that subsidies are not crucial to the OneWeb business model, but provided a different viewpoint on governments taking a role in connectivity projects.

“Subsidies have a part to play because in some cases, that’s a social purpose that governments want to fulfill. If they want to provide connectivity in certain markets subsidies will play a part,” he said. “I have to be very clear, [as OneWeb] received a $500 million investment from the U.K. government — I’m held to account to deliver a very significant return on investment.”