Mynaric Targets US Expansion to Take Laser Terminals into Widespread Use 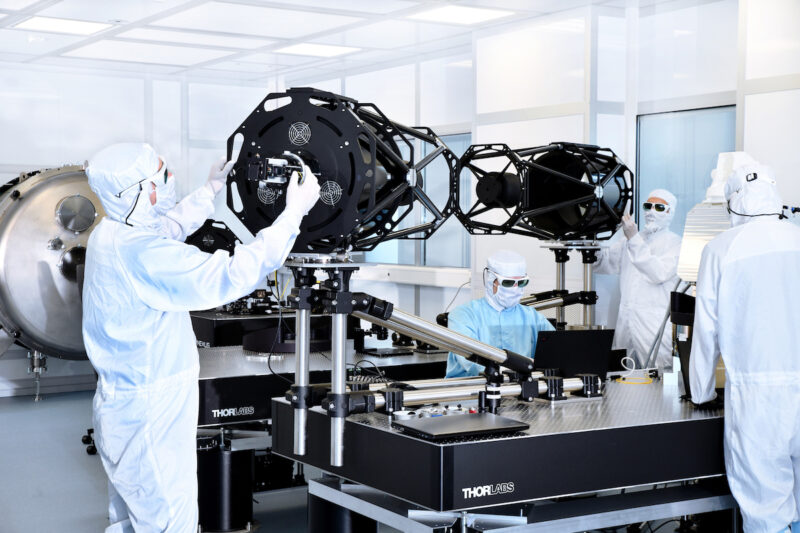 A link test bed for the CONDOR terminal at Mynaric’s facility in Germany. Photo: Mynaric

On the heels of opening a new U.S. office and joining Telesat’s team for a U.S. defense contract, Mynaric is looking to make its laser terminals mainstream on megaconstellations and disrupt how data is transferred in space.

Mynaric, a German company, has been developing laser terminals specifically designed for volume production since the company was founded in 2009, and its CONDOR terminal is currently in qualification as the company prepares to shift into deliveries and production. In the second half of the year, CEO Bulent Atlan opened a 10,000 square foot production facility in Hawthorne, California, and hired industry veteran Tina Ghataore to lead U.S. subsidiary Mynaric USA and head business development across the company.

Laser communications, which transmit data via a light laser between two terminals versus a Radio Frequency (RF) band, is not a new concept, but Ghataore said in a recent interview with Via Satellite that Mynaric has designed its terminals specifically for volume production. Mynaric plans to produce at a level to meet the needs of Low-Earth Orbit (LEO) constellations, versus one-off solutions that can cost tens of millions of dollars.

“The reason we’re making terminals cheaper and more powerful is fundamentally to drive that cost per bit down,” Ghataore said. “If our technology can really challenge that cost per bit, than hopefully every child, every teacher, and every doctor, while they’re mobile, can receive signals in a cost effective manner.”

Ghataore explained that beyond high throughput, laser communications are more secure than RF signals because they are not subject to jamming, making lasers an attractive option for government users, and applications like banking and enterprise that require high data security. In addition, lasers don’t require regulation of the International Telecommunications Union (ITU) or the FCC because light isn’t a regulated band.

Because LEO satellites are closer together than satellites in Geostationary Orbit (GEO), lasers allow data to be transmitted between satellites in the same plane, lessening the burden on ground infrastructure. This can be applicable to communication satellites or Earth Observation (EO) satellites.

The recent award of being named a subcontractor on Telesat’s Defense Advanced Research Projects Agency (DARPA) Blackjack contract was a huge sign of confidence in Mynaric’s work, Ghataore said, and offers the a proving ground for the small business to demonstrate that it can deliver for a government contract.

For the contract, Mynaric will supply multiple units of its flagship CONDOR terminals for Telesat’s work on the Blackjack Track B program, which looks to leverage commercial LEO technology for a global high-speed network for the U.S. Department of Defense (DoD). Mynaric’s terminals are scheduled to be delivered in mid-2021 to launch in the latter part of 2021. The launch will be the first ride to space for the CONDOR terminals.

Ghataore said a development earlier this year, when Mynaric withdrew from business activities in China, gives the U.S. government more confidence to work with the company. In July of this year, the German government prohibited Mynaric from delivering laser communication hardware to the country. The notice came after Mynaric requested clearance for a planned export, as Mynaric had uncompleted transactions with Chinese customers.

Mynaric is now focused on making deliveries for the Telesat order and another unnamed government customer, but the company is also targeting the business of megaconstellations from Amazon Kuiper, SpaceX Starlink and Telesat LEO. CEO Atlan is a SpaceX alum, and the new Hawthorne facility is just down the street from SpaceX. Ghataore says Mynaric has had discussions with all three operators and is open to developing a unique offering for any of the constellations.

“Our, terminals are not on paper — they’re real. You can touch them, you can feel them, you can test them on the link test bed,” Ghataore said. “We are showing everybody what we have, and hopefully that leads to confidence. But I fully understand that various companies have different methods in which they want to align in terms of vertically integrated or not. But we are positioned to support production at the levels that they need.”

Editor’s note: A previous version of this story misstated the size of Mynaric’s new facility and gave an incorrect spelling of Tina Ghataore’s name. The story has been updated.