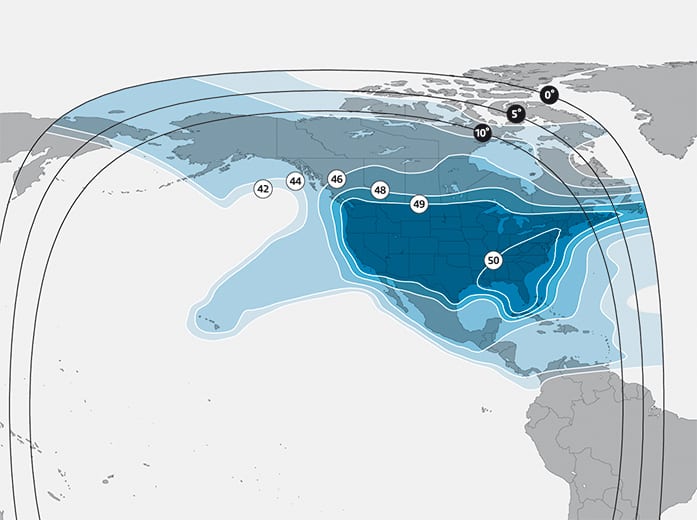 SES announced that the new SES 15 spacecraft has been operational at the 129 degrees west orbital position since Jan. 1. SES 15 flew into orbit on a Soyuz rocket from the Guiana Space Centre in Kourou, French Guiana on May 18, 2017. As planned, the all-electric satellite took six months to reach its orbital position and to successfully complete its testing.

SES 15’s high throughput payload will deliver coverage for major global In-Flight Connectivity (IFC) service providers, such as Global Eagle, Gogo and Panasonic Avionics. In addition, SES 15 has a dedicated wide beam to enable IFC providers to deliver live TV content on all flight routes across the United States, including Hawaii and Alaska, as well as Canada, the Caribbean and Mexico. This combination of beams allows IFC providers to optimize HTS capacity use for internet traffic and wide beam coverage for broadcast content, SES said.

SES 15 also carries a Wide Area Augmentation System (WAAS) hosted payload, which will enable the U.S. Federal Aviation Administration (FAA) to augment existing GPS with the goal of improving accuracy, integrity and availability of the system for the aviation industry.

SES 15 will be followed by the launches of two more hybrid Geostationary Earth Orbit (GEO) satellites with wide-beam/HTS capabilities, SES 14 and SES 12, as well as another four O3b Medium Earth Orbit (MEO) satellites in the near future. SES 14 will serve the Americas and the Atlantic region, and SES 12 will cover Asia-Pacific, and the Middle East. Together with SES 17, another HTS that will be launched in 2021, they will offer a global, multi-frequency system for aeronautical, maritime, government and enterprise customers.