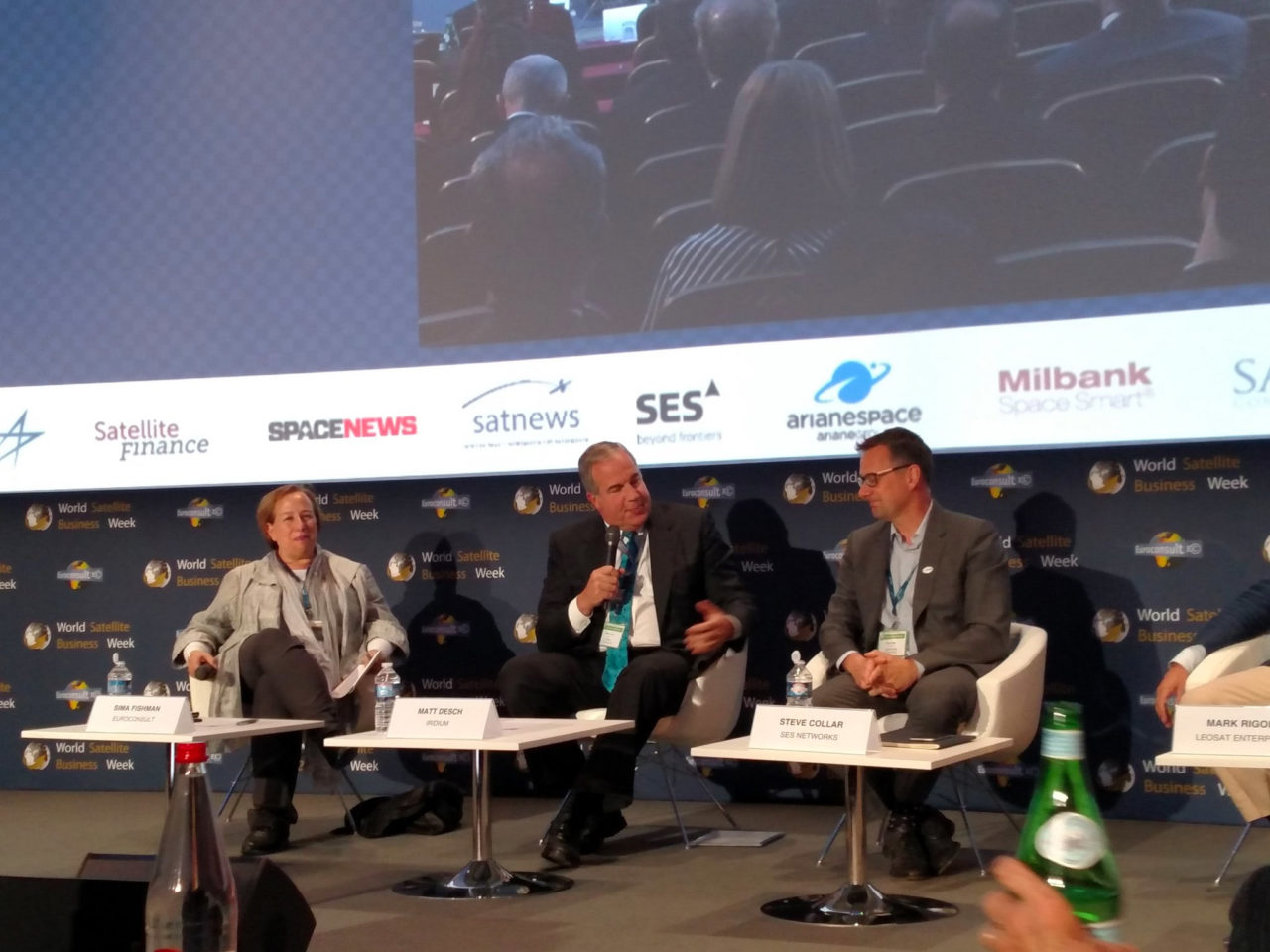 With so much interest in new megaconstellations, one of the ongoing themes at Euroconsult’s Summit for Satellite Financing is whether there will be enough demand for all of this capacity coming online. During the first day of the event, speakers from SES, LeoSat, Iridium and OneWeb discussed the question as part of the “Constellations in the Ecosystem: More Slices or a Bigger Pie?” panel.

Mark Rigolle, Chief Executive Officer (CEO) of LeoSat, is optimistic that the new operator could play a significant role in new markets moving forward. The company, which has a strategic partner in Sky Perfect JSAT, aims to begin service in 2021 and have the full constellation in place by 2022. He believes the satellite industry will have to think less technically and more about the markets to be successful going forward.

“We are a data networking company and we will use satellites to provision the network. We will complement fiber networks. Fiber is not everywhere, but a satellite network can be. We are rapidly deployable. Our latency is such is that 5G will become possible over us seamlessly. We will make satellite relevant in parts of the market where it has not been relevant before,” Rigolle said.

Addressing the question of how many systems the market can support, Rigolle said that the market can support a number of competing Low Earth Orbit (LEO) systems if they all do something different. He also hinted a change of attitude amongst key target telco customers such as Orange Business Services and Verizon Business Services, which he said really only offer satellite when they have no choice. “I think we will start to see that change,” he said.

Samer Halawi, Chief Commercial Officer (CCO) of OneWeb and previously CEO of Thuraya, called “OneWeb the most exciting project in the satellite industry” right now. Halawi doesn’t believe there is going to be a lack of demand for this new capacity. “The economics of new LEO and Medium Earth Orbit (MEO) are changing things. This will lead to an increasing size of the pie. The issue will be under-supply. We are bringing capabilities that are much higher than today. There are four billion people that are not connected,” he said.

Halawi also pointed out that satellite could play a role in major cities, highlighting the fact in Beirut, Lebanon, the speed of terrestrial is considerably slowly than what satellite can offer. So, even in places like Beirut, Halawi believes satellite can have a strong impact.

Iridium CEO Matt Desch told the audience that Iridium’s fastest growing business is now the Internet of Things (IoT), where it has seen significant growth recently. He admitted that the operator is not focused on different bands, and that “he never wanted to be in GEO” but that Iridium has been focused on what the business case is.“In our case, we want to differentiate our company from anybody else,” he said.

However, despite a number of ambitious plans, Desch does not see all these new systems even making it to market. “GEO and LEO are complementary technologies. It looks as though a lot of capacity is coming to market. But I don’t see all of this capacity actually making it. There are a lot of competing systems. The financial industry is a little nervous right now [because of all of this new capacity coming to market].”

SES has been very much the talk of the conference on Day One thanks to its major announcement regarding a highly ambitious new satellite system, O3b mPOWER, which will launch in 2021. SES believes these seven new satellites operating in the Medium Earth Orbit (MEO) will be key to a successful future, enabling the operator to deliver multiple terabits of throughput globally.

SES CEO Steve Collar said that the company expects a significant increase in revenues from data services over the next five years. He said O3b mPower represents a “massive scaling of its capacity.”

“We can form tens of thousands of beams across the system. Customers will go elegantly from O3b existing satellites to the new system,” he said.

Collar said SES was seeing increasing integration between satellite and terrestrial. In terms of thinking about what a satellite constellation can bring, operators need to consider how they can deliver the right kind of economics that close their customer’s business case. “You need to be able to close business cases for mobile operators and cloud operators. You have to address performance issues. This notion of being a global service is very important. The last thing you need is scale. The world is becoming increasingly bandwidth hungry. If you look at the growth of mobile data, we have to be able to scale our networks so they are relevant. To be a successful constellation and provider of data solutions, you need to tick a lot of boxes,” he said.

He also questioned whether LEO operators will have as much of an impact, saying that while LEO introduces a whole level of cost and complexity, he didn’t believe it was matched by the commercial opportunity.