Azercosmos CEO on How the Company Developed Local Talent 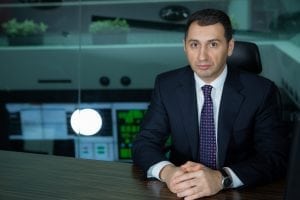 [Via Satellite 12-13-2016] Azercosmos, the national satellite operator of Azerbaijan, is one of a new breed of satellite operators looking to use satellite to better the communications and IT infrastructure of its own country. The company launched its first communications satellite, Azerspace 1, back in 2013 in a partnership with Measat. Its second satellite, Azerspace 2, in partnership with Intelsat, is due for launch next year. Via Satellite caught up recently with Rashad Nabiyev, CEO at Azercosmos, to talk about the next stage of the operator’s growth strategy.

VIA SATELLITE: What have been the main challenges you have faced in setting up a national satellite program for Azerbaijan?

Nabiyev: In Azerbaijan scientific research of space was conducted since the 1970s, but satellite operational business was totally new for the country. Our main challenge was the creation of a local team of experts able to compete at the international level. Azercosmos didn’t take the shortcut of employing skilled expatriate workforce, but did it the hard way, by developing local engineers, sales and support that we regarded to be a sustainable long term choice.

When recruiting people we prioritized soft skills over hard skills as we have been looking for future employees devoted to their mission. We valued willingness to push own boundaries and ability to work within a team. This is the way we shaped our team. When we started, we had less than a dozen people; Azercosmos family is now around 130 people and growing.

VIA SATELLITE: How has your engineering workforce benefited from the introduction of a satellite program?

Nabiyev: In 2011, when Azercosmos was established, there was no satellite engineering experience in Azerbaijan. This forced our company to form the technical department personnel through several years of training and experience exchange held around the planet at partner satellite operators.

VIA SATELLITE: What are the main reasons for Azerbaijan’s national satellite strategy and what are the key benefits of a sovereign satellite program?

Azerbaijan, which over the last two decades has been known as an oil-and-gas exporting country, entered a new phase of its strategic development striving for becoming a recognized brand in the regional telecommunications sector and diversification of its natural-resource-based economy. It is noteworthy that this endeavor proved to be a right choice considering today’s volatile energy markets.

For Azerbaijan, another benefit of having sovereign space program is the provision of high-quality broadcast and telecommunication services eliminating the dependence on satellite networks of other countries. Satellite connectivity changed the way our country obtains information and defines the ways of processing, protection, distribution and use of space information, thus contributing to the agenda of national security. Currently, our local customers include virtually all strategic local government agencies.

Last but not least, national satellite program is pursuing Azerbaijan’s strategic goals of developing highly skilled satellite experts, and by doing this accumulating unique knowledge and experience for future generations.

VIA SATELLITE: How do High Throughput Satellites (HTS) fit within your national satellite program? Do you have a strategy to accommodate the increasing demand for data?

Nabiyev: HTS have unlocked huge growth opportunities in major vertical market and geographic regions enabling many new applications. High throughput capacity has made its impact all over the world and in some regions we have now a risk of oversupply.

Azercosmos is currently analyzing the risks and opportunities lying ahead of us in the satellite market. Our preliminary conclusion is that we should not be competing on more capacity provision but rather positioning Azercosmos as local, customized and flexible solution provider.

VIA SATELLITE: Where do you feel that Azercosmos fits into an already crowded satellite landscape?

Nabiyev: Azercosmos is presenting itself as a leading regional satellite provider. Our target is to build a sustainable satellite neighborhood (constellation) with differentiated portfolio of applications and extensive customer base. Partnership with established companies such as Measat (Azerspace 1, 46 degrees east) and Intelsat (Azerspace 2, 45 degrees east) provides Azercosmos with new commercial opportunities in Africa, the Middle East and Europe.

VIA SATELLITE: Are you fearful of an oversupply of capacity as increasing amounts of satellites are set to be launched over the coming months and years?

Nabiyev: Oversupply of capacity will change and transform traditional satellite business. In the future, satellite operators will need to explore blue-ocean strategy in finding new business opportunities without extensive price erosion. Operational efficiencies and economies of scale are also important factors for satellite operators to stay. More emphasis will be put on customized approach solutions provision rather than simple capacity lease.

VIA SATELLITE: How do you see your future as a national satellite operator? Where does the program go next?

Nabiyev: Azercosmos, as a national satellite operator, is a key provider for all market segments in Azerbaijan: video, data, maritime and government. Azercosmos is working with both private and government sectors to ensure secure and reliable communication for all types of applications. Future expansion plans include deeper penetration of regional services and expansion into new mobility markets, a growing segment for satellite connectivity.

VIA SATELLITE: What have been the keen learnings since setting up the program?

Nabiyev: Looking back, we now realize how important Azercosmos initial decision to work with established, reliable partners was. Azerspace 1, our first satellite, was built by Orbital Science Corporation, launched by Arianespace, and it is a partnership with Measat. This shows Azerbaijan’s commitment to work on an international level with international companies to create a successful partnership business.

VIA SATELLITE: Finally, do you have plans to commission any new satellites or form other joint ventures with international players?

Nabiyev: In 2017, Azercosmos is preparing the launch of its second telecommunication satellite. Azerspace 2 will be located at 45 degrees east and will have coverage of Central/West Africa, Pakistan/Afghanistan and Europe/Central Asia. Azercosmos’ new satellite will be a close partnership with Intelsat and will have bandwidth for existing services now found on IS-12 and additional capacity for expansion.