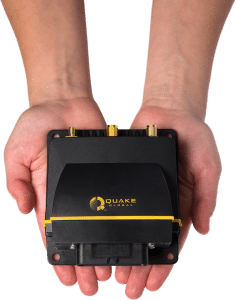 “What the user would really like to have are modems that have the ability to use multiple modes of communication. They don’t care if communications happen via satellite, terrestrial, Wi-Fi or any other means of transporting the data. Fundamentally what they need is the data,” she said.

IoT is seen as a growth opportunity across the telecommunications industry, and a growing number of satellite companies are seeking a larger stake in this market. Quake Global provides communications today from Iridium, Orbcomm and Inmarsat — three players already well established in M2M/IoT—along with several Global Navigation Satellite Systems (GNSS). Braunstein said Quake sought out global players with the ability to provide two-way communications. She estimated that approximately 60 percent of the company’s revenue comes from hardware sales, with RFID counting for 30 percent, and custom development the remaining 10.

Braunstein listed heavy machinery, the oil and gas industry, fisheries and marine applications, emergency and military and government applications as the top users of satellite-based IoT today, but she expects satellite will collate with other telecommunications methods in the next few years to reach even more markets.
“I believe that future satellite technologies will enable a variety of different Radio-Frequency (RF) bands to be compiled together. The new technologies will bridge 2G, 3G, 4G, 5G, and Wi-Fi type capabilities into the satellite systems. The new technologies will reduce the infrastructure of the hardware that exists today, and will open up markets in the consumer space, smart city automation, and be a part of smarter technology in general,” she said.
IoT appears to be a driving factor for this technology convergence according to Jeremy Green, principal analyst at Machina Research.

“The current fashion increasingly in Internet of Things is to become more like the Internet, where there is a divorce between access and applications,” Green told Via Satellite. “In a way, these solutions will overtime become more access agnostic, and as that happens, there is definitely a role for more kinds of access technology, whether that is low power technologies like LoRa or like narrowband IoT, which is part of [Third Generation Partnership Project] 3GPP. Satellite is just one more access technology among others.”

Green pointed to recent traction by the satellite industry with the LoRa Alliance as evidence of how satellite is being further integrated into IoT applications. Satellite operator Inmarsat recently joined the LoRa Alliance, which is creating a global, interoperable standard for Low Power Wide Area Networks (LPWAN) for IoT applications. Green said MOOnitor, an IoT cattle monitoring solution (think “Internet of Cows”) is also based on LoRa technology at the local level, with Globalstar providing backhaul.

“I think there is a natural synergy between some of the emerging low power technologies which can be deployed on a mesh basis or on a hub basis in places where there might not be any cellular coverage, and satellite as a backhaul technology,” he said.

Braunstein said Quake is investing today in satellite communications technology for global asset tracking, Vehicle to Infrastructure (V2I) capabilities for automotive and M2M markets, and RFID for asset control management and operation. She expects future satellite systems will be better equipped to work with connected vehicles and smart cities/environments.

“I believe that future satellites like OneWeb definitely will have ability to participate in that,” she said.