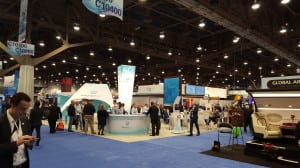 SmartSky’s booth at the National Business Aviation Association (NBAA) Convention and Exhibition 2015. The tower in the booth represents the size of the spectrum SmartSky is using, 60 MHz. It is roughly 18 feet tall. At that scale, the spectrum currently allocated for ATG in the industry would be about 1 foot tall. Helps visualize the difference. Photo: SmartSky.

[Via Satellite 11-24-2015] SmartSky Networks, designer of a new 4G LTE Air-to-Ground (ATG) network for the aviation sector, is open to partnering with satellite companies to augment its future connectivity solution. Ryan Stone, president of SmartSky, told Via Satellite that the perception of needing to have “either/or” is a misnomer, and that where satellite can improve the network it could find a niche.

“It’s all about the value that you deliver,” he explained. “It’s not just the performance; it’s also about the right price. It’s that combination that we deliver and that is why I think there is a great combination argument to be made for us working with satellite players. They are very complementary; not really as much in competition as everyone would want it to be seen.”

SmartSky is preparing to rollout a its network of 250 ATG towers across the continental United States with intentions of using a large 60 MHz chunk of spectrum to bring In-Flight Connectivity (IFC) on par with the broadband experience in modern residential and business settings. The key to accessing this spectrum is technology that enables frequency reuse so that spectrum already used on the ground can be reprioritized in the skies for aircraft. SmartSky spent millions of dollars developing this technology, according to Stone, and is confident that it will deliver an unrivalled experience.

“Whether it’s data from the aircraft or a live HD video call, whatever it happens to be, you can generate as much content and get it off the aircraft as fast as you can get it to the aircraft,” he said.

That same spectrum reuse technology would also apply to satellite, Stone added. He said the principal criterion for partnering with satellite companies is to balance pricing and throughput to maximize connectivity for aircraft in their given environment.

“If you can get the least cost per bit, and do it at high speeds, that is what everyone wants. What that means is you need to go with whatever is most efficient. So if I am over a land mass with high traffic, then an ATG network will hands-down be more efficient than a satellite network, but that doesn’t mean that one replaces the other. You need both, and I think you are going to see a lot of both in the coming years. It makes sense not only for geographic spread but also for economics,” said Stone.

Satellite could help SmartSky to expand internationally as the company grows. Stone said SmartSky has ambitions to grow beyond the U.S., but that this was the ideal starting point. SmartSky has its test sites up and running in Florida, and the remainder of its U.S. ATG sites under construction. Stone expects most of the network rollout to be complete by the end of 2016, with total coverage reached in early 2017.

It will take multiple parts of the satellite ecosystem working together to successfully implement space segment capabilities into the SmartSky network. The company announced this week a partnership with California-based AeroAntenna for two-bladed, electronically steered antennas to go on the underside of aircraft. Stone said, however, that the aircraft antennas currently under development are for the moment only designed to work with ATG.

Companies that are active in satellite are playing a role in the SmartSky ATG system today. Harris Corporation is designing custom antennas for the ground, and Satcom Direct is providing activation, billing, and customer support. Still, it will take more to make satellite an integral part. Stone expressed receptivity to this.

“There are many options and examples already in the market of different ways that this can be done. We are open to exploring opportunities,” he said.

Stone said a strength of the SmartSky ATG system is that it will be able to conduct beam forming and beam steering to provide dedicated bandwidth pipes to each aircraft. Though spot beams from High Throughput Satellites (HTS) have gotten progressively smaller, Stone said there is still a lot of sharing within those beams. The ATG system will be able to boost experience quality in congested airspace better than satellite, he added.

Stone declined to say what level of speed the SmartSky ATG network will provide, but said the system will have robust bandwidth and latency so low that to human users it will be imperceptible. SmartSky has performed tests with live HD video, which he said demonstrated a clean connection without buffering or delays — something that could also be an issue with satellite. Stone said SmartSky prefers not to quote peak speeds, but instead tells customers they will have a 4G experience.

“Whatever the Mbps is, we say when you are streaming video, go do a speed test and see what the number is. We find that once you are able to do everything that you want to do, the number doesn’t take on as much importance,” he said.