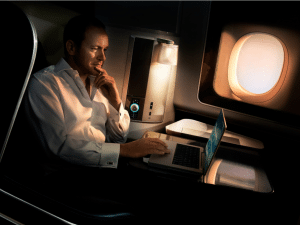 [Via Satellite 06-05-2014] The burgeoning success of Air to Ground (ATG) in North America has caught the eye of British Mobile Satellite Services (MSS) operator Inmarsat. The company announced intentions to create a new ATG system across the European Union (EU), overlay it with a new satellite and make it compatible with Global Xpress (GX), a Ka-band mobile satellite system, to provide worldwide in-flight connectivity.

The decision comes on the heels of AT&T’s entrance into the North American ATG market. Rupert Pearce, CEO of Inmarsat highlighted this entry in a recent conference call as evidence of the market’s potential, and said that Gogo has essentially provided a template for how to implement a hybrid satellite-terrestrial connectivity service. He hopes to replicate Gogo’s success in Europe.

“Europe is the number two regional commercial air transport market after North America today, measured by number of aircraft, but because of faster growth characteristics, it’s projected to achieve parity with the North American market by 2025,” Pearce said on a conference call. “Like the North American market, the European market has significant air traffic density in terms of routes, making it ideal for a hybrid connectivity service, and offers a market size and revenue opportunity more than capable of generating a very attractive Return on Investment (ROI) for us.”

The new satellite is a unique joint project between Inmarsat and Arabsat-owned Hellas-Sat. To be situated at 39 degrees east, Inmarsat’s EuropaSat payload will deliver S-band services across the 28 member states of the EU. Hellas-Sat’s payload, Hellas-Sat 3, will carry 44 Ku-band transponders plus one for Ka-band. Inmarsat said sharing the asset halves the cost of manufacturing, launch, insurance and operations, saving the company approximately $200 million compared to the cost of deploying a solo S-band satellite. Thales Alenia Space is building the EuropaSat/Hellas-Sat 3 satellite based on the Spacebus 4000 C4 platform. The launch date is set for 2016.

Inmarsat owns 30 MHz of S-band spectrum that it intends to use for the hybrid network. This decision certainly impacts EchoStar (SATS), the other holder of significant S-band spectrum rights over Europe. Inmarsat has already begun the licensing process with several EU states and plans to roll out its ATG network as it receives national licensing agreements.

“This is a relevant news story to EchoStar because EchoStar is the other S-band licensee in Europe and it is constructing the Terrestar 2 satellite to deploy a mobile satellite service using its 30 MHz of S-band. There have also been reports that SATS was potentially interested in acquiring Inmarsat’s S-Band, an option that now appears to be off the table,” Wells Fargo Senior Analyst Andrew Spinola wrote in a research note. “Without knowing what SATS plans to do in Europe beyond launch Terrestar 2 and maximize the value of its spectrum, we can’t know if this move limits EchoStar’s options or has no impact. However, it does not appear that it could be a positive for SATS.”

For Arabsat, the joint satellite replaces Hellas-Sat 2 and is part of a larger constellation expansion project. Hellas-Sat 3 will provide Direct-To-Home (DTH) broadcasting services across Europe, the Middle East and Africa. Hellas-Sat plans to offer more HD channels as well as free-to-air, in addition to providing more room for existing customers.

“This is the first satellite contract among our announced four satellites’ program; Negotiations with Inmarsat started last November and [were] just recently concluded. The flexible design of our program’s bid in terms of process and selection criteria has allowed for this agreement to realize and to be carved out of the bid,” said Khalid Balkheyour, Arabsat president and CEO and chairman of the board of directors of Hellas-Sat.

Christodoulos Protopapas, CEO of Hellas-Sat, said this satellite marks the beginning of the company’s two-satellite expansion plan, both of which are part of Arabsat’s order for four new satellites.

“Hellas-Sat will leverage 39 [degrees east] by adding another satellite; Hellas-Sat 4 with wide coverage and intensive Ku-beams over Europe, Middle East and Africa for different types of broadcasting and telecommunication services, in addition to a multi-spot Ka-beams payload for broadband and business networks,” he added. “The constellation of both HS-3 and HS-4 will provide extensive redundancy and backup capacities to further secure DTH networks and customer base, and guarantee the sustainability of the business and provide competitive advantage to its customers in Europe and other areas.”

For Inmarsat, sharing the satellite opens up more funding for the towers that it needs constructed across Europe. The cost of ground network development and service deployment is $200 to $250 million over the course of six years. Inmarsat said it will not build the towers as it is no more a tower manufacturer than it is of satellites. The company is currently talking to partners to help build out this infrastructure.

“We believe that the same in-flight connectivity opportunity exists in Europe and that, with the support of EU telecoms regulators, Inmarsat can rapidly bring to market unique, high-speed aviation passenger connectivity services to meet this market demand on an EU-wide basis,” said Pearce. “A number of European airlines are aligned with this vision and we are absolutely delighted to announce advanced discussions with British Airways to be a launch customer on our new aviation network.”

Pearce said to expect announcements regarding other early customer commitments in the near future. He also hinted at increasing Inmarsat’s collaboration with Gogo, or even partnering with AT&T to use their ATG coverage over North America.

“Clearly we are in the business of making sure that Global Xpress is the fundamental global overlay for aviation and passenger connectivity worldwide, so there is a natural opportunity for us to partner with Gogo, and you know well that [Gogo is] our GX [Value Added Reseller] (VAR) so, the interlocking nature between the Gogo network domestically and GX has been established in principal. And I’d say in passing we would be open to precisely the same arrangement with AT&T’s new network.”

Pearce said Inmarsat is also curious about using a single radio that could connect and roam across more than one ATG network. This is something the company will look into going forward. Inmarsat has not decided on whether the service will be delivered through airlines, or charged directly to passengers the way Gogo currently operates. According to Pearce, it is too early to say which model is best.