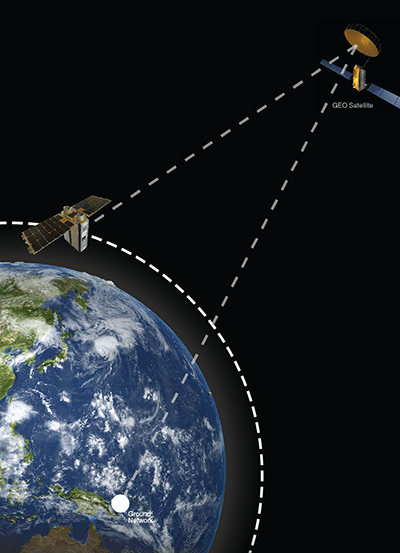 Astroscale’s upcoming ELSA-M debris capture mission will use Addvalue and Inmarsat’s data relay service to communicate during the mission, the companies announced this month.

IDRS is the inter-satellite data relay system offered by Addvalue, powered by Inmarsat’s satellite network. It works by having an Addvalue terminal on a client’s satellite in Low-Earth Orbit (LEO), and letting the client satellite communicate with ground terminals via Inmarsat’s Elera network in Geostationary Orbit (GEO).

Addvalue said IDRS will play a crucial role in Astroscale’s mission by providing continuous real-time connectivity during proximity maneuvering to capture the client satellite and ready it for de-orbiting. It removes the need for waiting for a pass over a ground station to command and control the satellite during time sensitive operation.

The contract between Astroscale and Addvalue covers the IDRS space terminal equipment for this first mission and will be followed by a service agreement in support. The mission — End-of-Life Services by Astroscale — is planned to launch near the end of 2024.

“We’re honored to be working with Astroscale, a private company with a vision for the safe and sustainable development of space for the benefit of generations to come. We are gratified that IDRS will play an important role in helping Astroscale shape a more debris-free space future,” commented Addvalue CEO Tan Khai Pang.