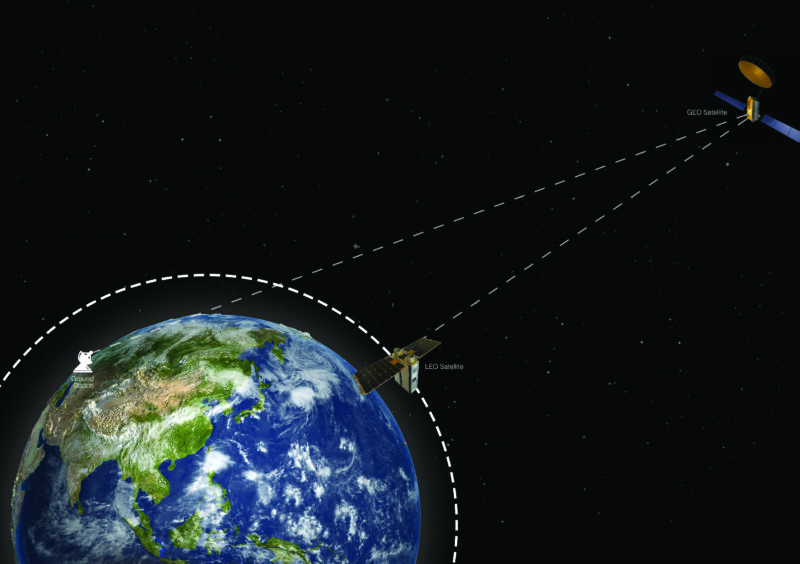 Inmarsat and Addvalue have established a real-time link between satellites in high and Low-Earth Orbit (LEO), the companies announced Monday. This new system consists of an Addvalue on-board terminal and the Inmarsat data relay service. The companies have been working to offer this communications service since 2017.

The new Inter-satellite Data Relay System (IDRS) service was commissioned on Capella Space’s Sequoia satellite at 10:14 a.m. PST on Nov. 12. The Capella satellite in LEO communicated with Inmarsat’s I-4 satellite network, which operates at the L-band spectrum and sits in Geostationary Orbit (GEO).

“This is huge. Capella becomes the first and only commercial SAR [Synthetic Aperture Radar] company in the world to use a GEO satellite for real time tasking. This means faster delivery times and more actionable information from space,” Capella Space CEO Payam Banazadeh tweeted.

Inmarsat said this service will cut waiting times for data transfer from LEO from several hours to minutes. Traditionally, LEO satellites must be in range of a ground station to transmit data, but the new data link allows LEO satellites to stay in continuous communication with the ground, and transmit data in realtime.

Todd McDonell, president of Inmarsat Global Government, commented, “In-orbit connectivity represents an exciting new growth market for both Inmarsat and Addvalue. This LEO smallsat market is growing at an exponential rate. What is critical to LEO operators such as Capella Space is the ability to offer timely services their customers now expect in a connected world. Inmarsat’s L-band satellite network is uniquely placed to facilitate seamless real-time communications that are designed for mobility and can be administered globally.”