The Future of Satellite Connectivity 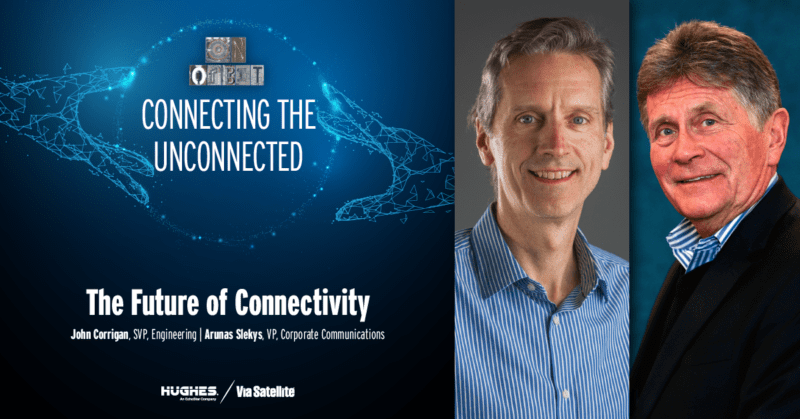 For our sixth and final episode of our special podcast series, “Connecting the Unconnected,” we’re joined by Hughes Vice President of Corporate Marketing Arunas Slekys and Senior Vice President of Engineering John Corrigan for a conversation about the future of global satellite communications.

During the conversation, we discuss how broadband connectivity is more than just a technology issue – it’s a fight for global economic equality. We also talk about how the rollout of 5G services could impact the development of satellite hardware and ground terminals.

“Connecting the Unconnected” was generously sponsored and co-produced by Hughes. If you’ve been following along with us during this series, then you’ve heard from several different executives at Hughes about the many projects they have around the world using satellite to connect people. We’ve covered satellite internet, cellular backhaul, community Wi-Fi, emergency response communications and the regulatory environment. If you haven’t done so, please go back and listen to the five previous episodes.

We’ll return to our regular bi-weekly schedule after next week’s episode. Our guest will be grammy-award winning musician and songwriter with The Flaming Lips Steven Drozd, who took some time in between recording and shooting a music video to talk about the music and songs of space!

After that, we’ll be releasing our On Orbit Live podcast from SATELLITE 2020 – What is NewSpace? With guest hosts Brian Garrett-Glaser and Grace Graham, speaking with Tanya Harrison, Rafferty Jackson, Ali Younis and Charlie Nitschelm about what defines this new movement happening in the space industry. We’ll also be releasing a best of SATELLITE 2020, including an excerpt from my fireside interview with SpaceX Founder Elon Musk.

For everyone working at home, there will be plenty of On Orbit podcasts to keep you company!