Why 2021 Could be a Boon Year for Maritime Connectivity 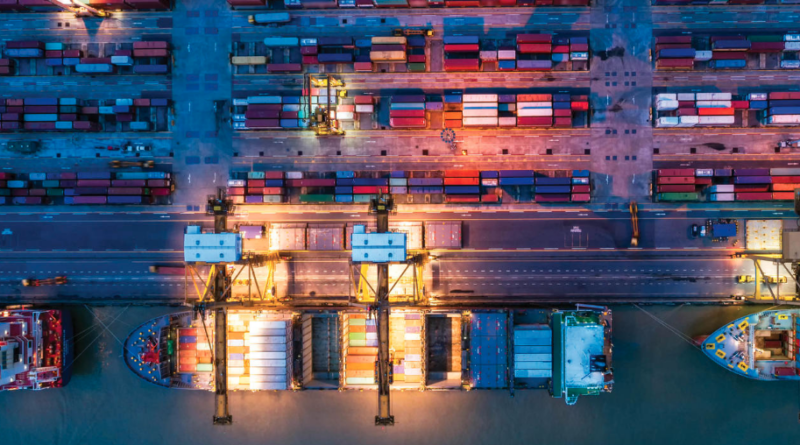 At the start of 2021, things may not have been looking too optimistic. New variants of COVID-19 were emerging and many nations and states re-entered into draconian lockdowns that potentially halted a strong consumer rebound. To further complicate matters in March, the Suez Canal was blocked for almost a week by a large container ship owned by Evergreen Marine, holding up a cohort of other commercial vessels. Many would assume another disaster loomed for the shipping industry.

On the contrary, the demand for goods is strong and many expect this to continue in the long term. To back this up, Evergreen, recently ordered 20 Very Large Container Ships (VLCSs). A total of 72 new ships were ordered in March and this amounts to 866,000 of new TEU (Twenty-foot Equivalent Unit) capacity in the future.

The doom and gloom we were experiencing during the winter of the northern hemisphere wasn’t so glum for ocean carriers, whom recorded an extraordinary Q4 2020. Net earnings for eleven carriers whom report their financials noted an aggregated sum of $5.8 billion in Q4 2020, according to Blue Alpha Capital. This is quite a turnaround for the market considering the conservative outlook before the COVID-19 pandemic outbreak.

The merchant shipping market had been inhibited by a glut of overcapacity which consequently hampers price if demand is not able to balance it. As a result, the industry has seen an array of consolidations and alliances.

At the onset of the pandemic, carriers took immediate and mass action to reduce capacity by blanking sailings. Examples in January and February 2020 include vessels on transpacific routes recorded 21 sailings blanked, in addition to 61 voyages cancelled over Chinese New Year in late January 2020. This reduction in capacity was actually relatively easy to accomplish via the past company consolidation and other strategic alliances in effect. Furthermore, with trade embargoes between China and the United States during Trump’s administration, a mishmash approach was adopted by carriers to anticipate regional pockets of demand.

As restrictions of the global pandemic briefly subsided, global demand returned with a punch. Two key factors allowed merchant companies to profit hugely from soaring transpacific rates and the added rate impact of box shortages. A shortage of capacity due to reduced vessel sailings and carriers’ fleet scattered across the seas rather than where demand was greatest. With periods of adjustment like this, huge rewards are possible and three of the Asia’s biggest carriers made a killing.

At Valour Consultancy, we estimated 11% of merchant vessels with Very Small Aperture Terminals (VSAT) stopped paying for their connectivity service at some point in 2020. Obviously, this presents a dilemma to service providers. 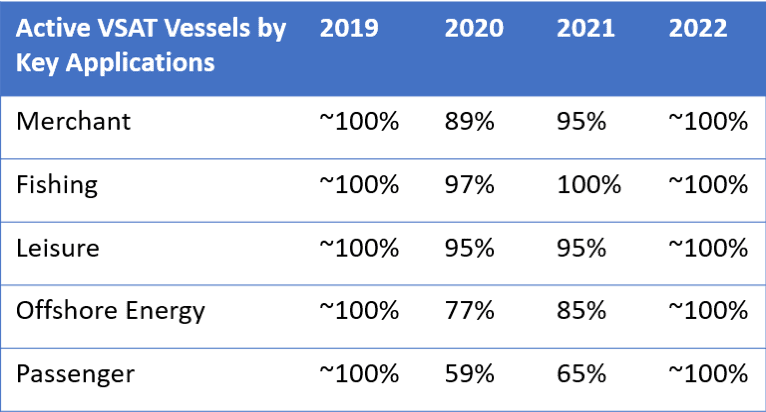 With the obstacle of non-payment, I wanted to explore how service providers might deal with such dilemmas.

These three key points are to be noted: I have assumed fishing and leisure were largely unaffected (as seen above). Also, a good number of vessels are on flexible monthly contracts. However, on the whole most customers are committed to a monthly connectivity service fee. Finally, it is highly possible some vessels will have simply asked to pause their contracts during COVID and this could well have been allowed without incurring any penalties.

In our opinion, service providers could either defer their customer’s 2020 owed fees to 2021, in hope of the current situation improving or agree to extended contract period terms. With connectivity prices falling at a steep rate, more capacity imminently arriving from Low-Earth Orbit (LEO) providers, again potentially reducing prices; most companies are unlikely extend existing contract terms and rates for longer than necessary. As such, we have assumed two-thirds of those unable to pay their 2020 monthly contracts, deferred to 2021 rather than extend contract terms.

On average, we took an average of six months service charges deferred to 2021 of those non-payers.

Looking at the passenger market and offshore energy, both took a worse hit than the merchant market. Passenger carrying vessels, particularly ocean voyages, were only 59% active, and thus 41% of those vessels deferring payments from 2020 to 2021. Offshore energy market; around 23% of those vessels were inactive and would have deferred incomes. However, it is likely half of these vessels would have terms to cover those inactive vessels during periods of inactivity. The turbulent nature of offshore energy has somewhat prepared companies for these eventualities.

Valour Consultancy projects the 2021 VSAT retail revenues will be 17% up from 2020. Deferred income amounting to nearly $60 million in 2021, and a further $1,102 million in revenues for organic satellite connectivity growth.

I believe there are four critical drivers for growth 2021. Firstly, the strong rebound as people want to get back to their normal lives and we will see an extra exuberance for goods and demand for goods to be shipped from one place to another. An interesting macroeconomics research group estimated 150 billion British pounds ($211 billion) in extra excess savings had built up over the pandemic just in the United Kingdom. Consider something similar for the rest of Europe, North America, and other wealthy nations. That’s a lot consumer goods.

Additionally, as many people have worked from home, constantly connected, our expectations for the amount of connectivity and quality of the service have shifted upward. Video calls are preferred to normal audio calls, as the world has “Zoomified.” This will be the case for both crew and passengers on vessels. We will definitely see an increase in passenger vessel throughput by 20% to 30% from normal times, back in 2019, some satellite operators state.

The prices for cellular data roaming packages tariffs are declining fast too. As such, their appeal is much greater and thus users are much more liberal with the amount of data they consume. The portion of passengers on ferry or cruise vessels is also directly increasing and a lot of this traffic is backhauled via VSAT.

Finally, service providers are enabling shipping customer much greater control over their maritime packages. Switching the users, or packages between regions and other tariff features. This may not directly translate to more data or revenues, however, it does make users more comfortable with service level agreements and packages. As such, it is likely we will see a greater uptake of VSAT services because of this. 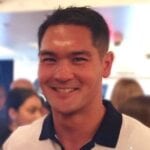 Joshua Flood is a senior research consultant at Valour Consultancy. He runs the maritime research division which encompasses an array of reports examining connectivity and smart shipping technologies within the industry.