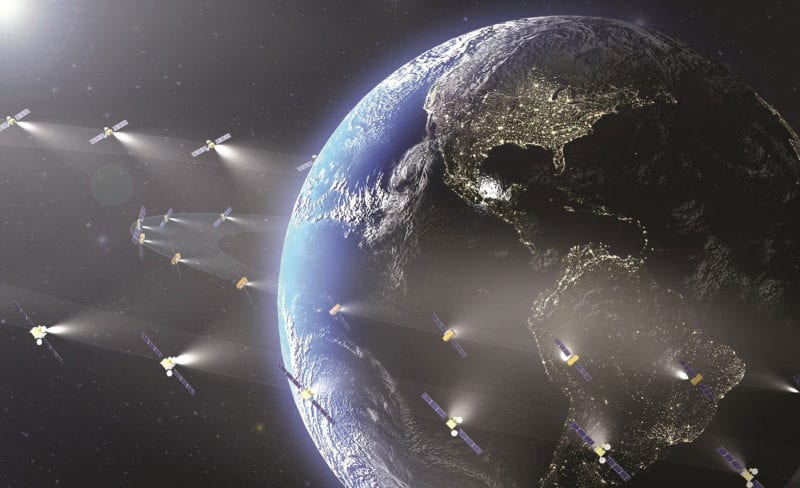 SES and Thales reached a new record for In-Flight Connectivity (IFC) speeds. The companies demonstrated uninterrupted access to high-throughput broadband applications for the first time over a platform supporting multi-orbit interoperability, switching between SES’s Geostationary Orbit (GEO) and O3b Medium-Earth Orbit (MEO) satellite beams. The demo flight from Melbourne, Florida to the Atlantic coast of Nicaragua saw dozens of switches successfully completed between GEO and MEO beams, and between multiple MEO satellites within a beam, using the Hughes Jupiter system.

Engineers aboard the test flight were able to simultaneously use a range of services demonstrating rates in excess of 265 Mbps via the Thales FlytLIVE connectivity network featuring the Hughes Jupiter System and a Hughes ModMan integrated with the ThinKom Ka2517 phased-array airborne antenna. The engineers were able to demonstrate reliable delivery of 4K video streaming,  social media networking, e-commerce transactions, audio conferencing, interactive gaming, and web browsing on-board the Gulfstream G-III aircraft.

“The world’s first low-latency, high performance broadband aero experience is closer than ever before with this tremendously successful demonstration of MEO and GEO interoperability. Driving scale and performance into our customers’ networks is fundamental in delivering the best passenger experience in the skies. Our cruise customers have long experienced the benefits of the combined power that low latency MEO- and GEO-based connectivity brings to network performance and resilience. This innovation is now on its way for connected commercial and business air travel,” said Steve Collar, CEO of SES. “We are gearing ourselves up for the launch of O3b mPOWER and now, with a demonstrated ability to roam seamlessly across our GEO and MEO networks, our customers will enjoy unprecedented speed and performance from our O3b constellation, while also benefiting from the scale and reach of our GEO fleet.”