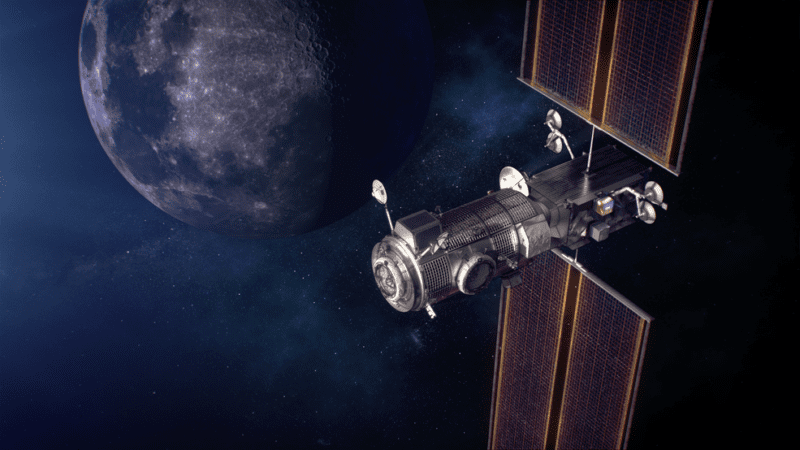 An illustration of the Gateway’s Power and Propulsion Element and Habitation and Logistics Outpost in orbit around the Moon. Photo: NASA

NASA has chosen SpaceX’s Falcon Heavy rocket to launch elements of the Gateway, which will be the first long-term orbit outpost of the Moon. The contract, worth $331.8 million, is for a set for May 2024. The launch will take off from Launch Complex 39A at NASA’s Kennedy Space Center in Florida.

The mission will carry NASA’s Power and Propulsion Element (PPE) and Habitation and Logistics Outpost (HALO). The PPE, built by Maxar Technologies, is a solar electric propulsion spacecraft that also will provide power, high-speed communications, attitude control, and move the Gateway to different lunar orbits. The HALO, built by Northrop Grumman, is the pressurized living quarters where astronauts who visit the Gateway will work.

According to NASA, the Gateway will serve as a rendezvous point for Artemis astronauts traveling to lunar orbit aboard Orion prior to transit to Low-Lunar Orbit and the surface of the Moon.

Earlier this year, Intuitive Machines selected SpaceX to launch its NASA-backed IM-2 Polar Mission to the Moon on a Falcon 9 rocket. SpaceX will launch both of Intuitive Machine’s NASA payload deliveries. In addition, NASA awarded SpaceX a contract last week to launch its SPHEREx astrophysics mission on a Falcon 9 rocket in a mission set for 2024.