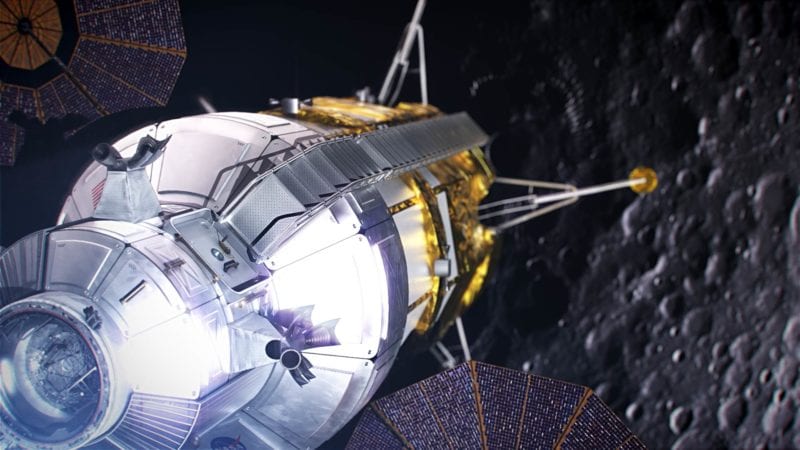 A render of a moon lander for NASA’s Artemis mission. Photo: NASA

NASA has announced that Blue Origin, Dynetics, and SpaceX will design and develop human landing systems for the Artemis program, which aims to return humans to the surface of moon by 2024.

Blue Origin is developing the Integrated Lander Vehicle (ILV) – a three-stage lander which will be launched on its New Glenn Rocket System and ULA Vulcan launch system. The Blue Origin National Team includes Lockheed Martin, Northrop Grumman, and Draper. Dynetics, a Leidos company, is developing the Dynetics Human Landing System (DHLS) – a single structure providing the ascent and descent capabilities that will launch on the ULA Vulcan launch system. And SpaceX is developing Starship – a fully integrated lander that will use the SpaceX Super Heavy rocket.

The human landing system awards are firm-fixed price, milestone-based contracts. The total combined value for all awarded contracts is $967 million for the 10-month base period. Now, the commercial partners will refine their lander concepts through the contract base period ending in February 2021.

“We are on our way,” said Douglas Loverro, NASA’s associate administrator for Human Explorations and Operations Mission Directorate in Washington. “With these awards we begin an exciting partnership with the best of industry to accomplish the nation’s goals. We have much work ahead, especially over these next critical 10 months. I have high confidence that working with these teammates, we will succeed.”