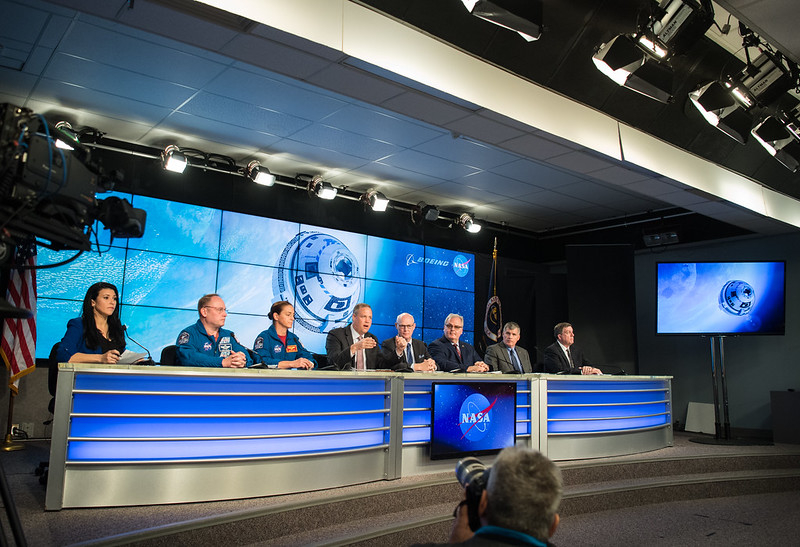 NASA, ULA, Boeing and ISS officials during a press conference following the launch of Boeing Starliner on Dec. 20. Photo: NASA

Boeing’s CST-100 Starliner spacecraft landed at White Sands Space Harbor in New Mexico on Sunday, bringing an end to NASA‘s Orbital Flight Test, which missed its objective to dock with the International Space Station (ISS) because a necessary orbital burn did not happen after the launch on Friday, Dec. 20. The uncrewed mission for NASA’s Commercial Crew Program was a chance to dock with the ISS and prove the Starliner’s autonomous mission capability — a step toward returning human spaceflight capability to the U.S.

In a news release, NASA said that the Starliner landed on Sunday morning at 7:58 a.m. EST. It was the the first land touchdown of a human-rated capsule in U.S. history.

“This mission has only strengthened the resolve of the NASA, ULA, and Boeing teams,” NASA Deputy Administrator Jim Morhard said in a statement. “Systems were tested, but more importantly the teams were tested. The hardest parts of this mission were a tremendous success. The Commercial Crew Program is strong.”

On Friday, the Starliner spacecraft was launched atop a United Launch Alliance (ULA) Atlas V rocket from Space Launch Complex 41 (SLC-41) at Cape Canaveral Air Force Station in Florida, at 6:36 a.m. EST. At 6:51 a.m., Boeing Space tweeted that the spacecraft had separated. But at 7:25 a.m., Boeing Space tweeted that there had been an off-nominal insertion. Then, the spacecraft was put in a safe orbit.

In a Friday press conference, Jim Chilton, Boeing Space and Launch senior vice president, explained why the spacecraft was not able to execute the orbital insertion burn required to rendezvous with the ISS.

Chilton said that the vehicle began to do burns and attitude control, and the flight team reacted. Engineers sent commands to take over, but they believe there was a delay in the command due to a gap between Tracking and Data Relay Satellites (TDRS).

During the press conference, NASA Administrator Jim Bridenstine said that the Starliner would gather valuable data while in orbit, and highlighted that Friday’s launch was the first time a Centaur upper-stage rocket with two RL-10 engines demonstrated a successful flight since 2004.

Bridenstine also said that if crew been on board, the situation may have turned out differently.

“This anomaly has to do with automation,” he said. “And [astronauts Nicole Mann and Mike Fincke] are trained specifically to deal with the situation today where the automation was not working according to plan. If we would have had crew in there, number one, they would have been safe. … And in fact, had they been in there, we may be docking with the International Space Station tomorrow.”

Nicole Mann said astronauts train for this type of contingency, and she has no safety concerns about the Starliner. “Had we been on board, there could have been actions that we could have taken,” she said.

According to NASA, the Starliner will be refurbished for Boeing’s first operational crewed mission, following the Crew Flight Test. NASA astronaut Suni Williams, who will fly on that mission, dubbed the spacecraft “Calypso” after the ship of famed explorer Jacques Cousteau.