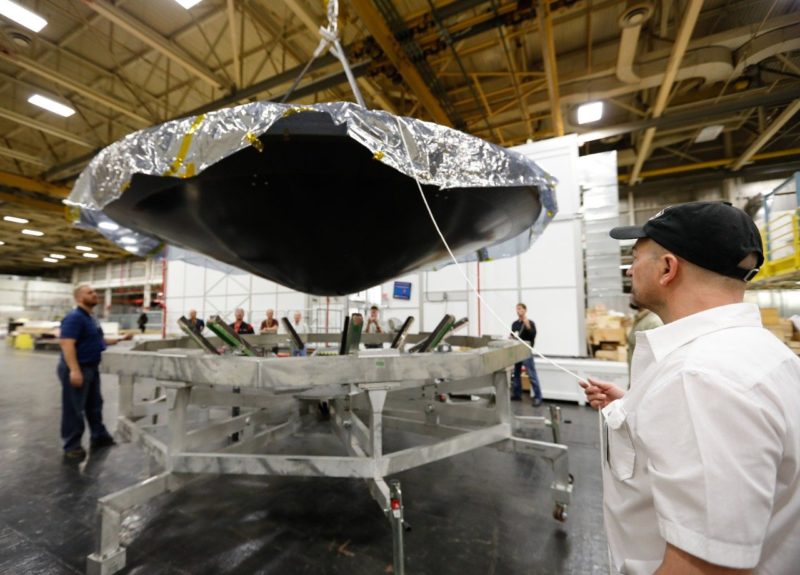 Lockheed Martin delivered the capsule-shaped aeroshell that will protect NASA‘s Mars 2020 rover to the Kennedy Space Center, in Titusville, Florida, on Dec. 12. The aeroshell will encapsulate the Mars 2020 rover during its deep space cruise to Mars, and protect it from the intense heat as the entry system descends through the Martian atmosphere to the surface of Mars. The mission will launch in July 2020 and land on Mars in February 2021.

Because of the large mass and unique entry trajectory profile that could create external temperatures up to 3,800 degrees Fahrenheit, the heat shield uses a tiled Phenolic Impregnated Carbon Ablator (PICA) thermal protection system. Lockheed Martin claimed this will only be the second time PICA has flown on a Mars mission. The company reported that at nearly 15 feet in diameter, this is the largest aeroshell/heat shield ever built for a planetary mission.

“Even though we have the experience of building the nearly identical aeroshell for the Curiosity Rover, the almost 15-foot diameter composite structure was just as big a challenge to build and test 10 years later,” Neil Tice, Mars 2020 aeroshell program manager at Lockheed Martin Space said. “We’ve built every Mars aeroshell entry system for NASA of its 40 years of exploring Mars, so we pulled from that experience to build this important system.”