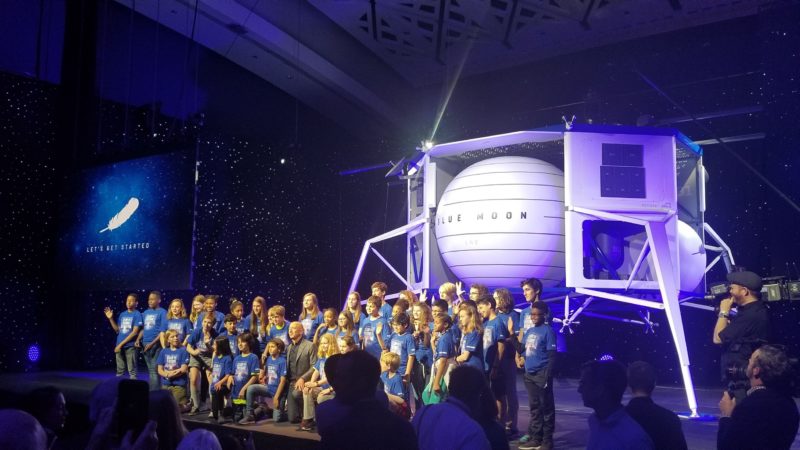 This reveal aims to start a new era of building infrastructure in space. “This is an incredible vehicle that is going to the Moon. People are very excited to soft land their cargo on the moon in a way you can’t today,” he said. The first customers were revealed to be Surrey Satellite Technology (SST), Airbus, Massachusetts Institute of Technology (MIT), Parc, John Hopkins Applied Physics Laboratory, Arizona State University (ASU), OHB, and Southwest Research Institute (SwRI).

“It is time to go back to the Moon, but this time to stay,” he added. “This is a multi-generational vision. We need to inspire future generations.” The lander aims to change the dynamics of how people on Earth can use resources on the Moon for peoples’ future.

In an engaging presentation, Bezos painted his vision for the future and how today’s generation must help set up the infrastructure of today to fuel space entrepreneurship in the future. With finite resources on Earth, today was all about Bezos’s and Blue Origin’s vision of the future. “Earth is the best planet. We need to protect it. We have to use the resources of space. We must have a future for our grandchildren and their grandchildren. It is this generations job to build the road to space, so we can unleash creativity in the future for future space entrepreneurs. If this generation builds the road to space, we will see thousands of entrepreneurs build space based businesses.”

Bezos name-dropped physicist Gerard O’Neill, and the future creation of “O’Neill Colonies” which would see people living away from Earth for the first time. However, while this maybe some time away, Blue Moon aims to kick start the process of building the infrastructure that will eventually lead to humans living and building eco-systems and communities away from Earth. He mentioned that the Moon is a source of key resources.

Additionally, Bezos revealed the new BE-7 engine, which is powered by liquid hydrogen. The fuel will be used on Blue Moon in three different ways: by powering descent; preventing boil-off; and powering hydrogen fuel cells.

Additionally, Bezos said that the lander will be able to be refueled on the moon, and can land within 75 feet of its target, using the train of the moon as a guide post. It wasn’t clear whether or not Blue Moon itself is capable of carrying humans, or if it attaches to a vehicle designed for human cargo. Bezos didn’t specify during the presentation and did not take questions after.