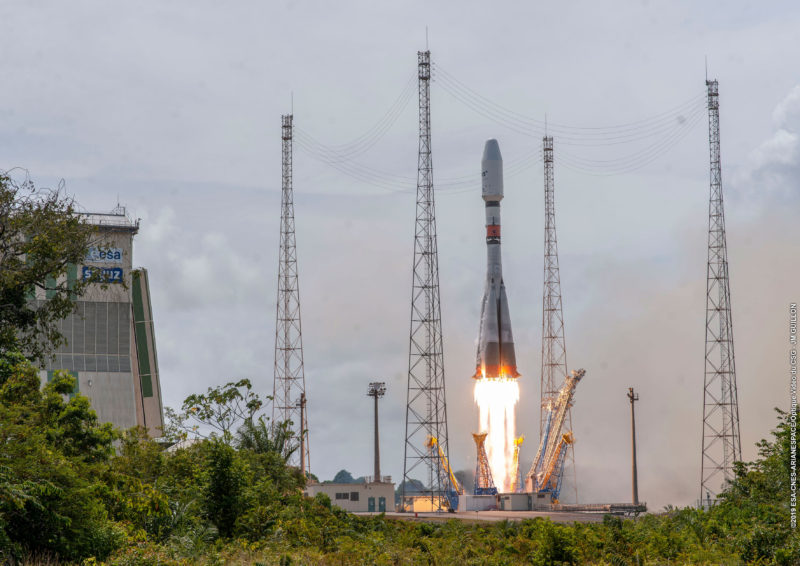 Arianespace successfully launched four O3b Medium Earth Orbit (MEO) satellites on a Soyuz rocket from the Guiana Space Center in Kourou, French Guiana on April 4. The Soyuz launch marks a milestone in SES’ O3b MEO journey, bringing the number of O3b satellites to 20, and making the transition into its next-generation MEO system. The satellites were built by Thales Alenia Space.

According to the release, the O3b MEO system has been successful since its first launch in 2013. Located almost 8,000 kilometers away from the earth’s surface, the O3b constellation delivers fiber-equivalent performance and has massive geographic reach, enabling the delivery of  data networks and solutions— including cloud services and applications.

“This launch marks a very important part in the O3b journey. We started O3b with this bold vision of changing lives by connecting people. We wanted to create a meaningful impact, and we have. We have connected underserved communities with high-performance internet. We have restored connectivity across disaster zones. We have changed the notion that you can’t be as connected at sea as on land. And we have made the cloud available to businesses where it was never possible before,” said John-Paul Hemingway, Chief Executive Officer of SES Networks. “As this launch completes our first-gen O3b system of 20 satellites, it also marks the transition into our next-generation MEO system, O3b mPOWER, the only fully-funded NGSO broadband system in development today. When O3b mPOWER launches in 2021, SES will bring massive scale to our proven O3b model – driving digital transformation and cloud adoption virtually everywhere on the planet.”