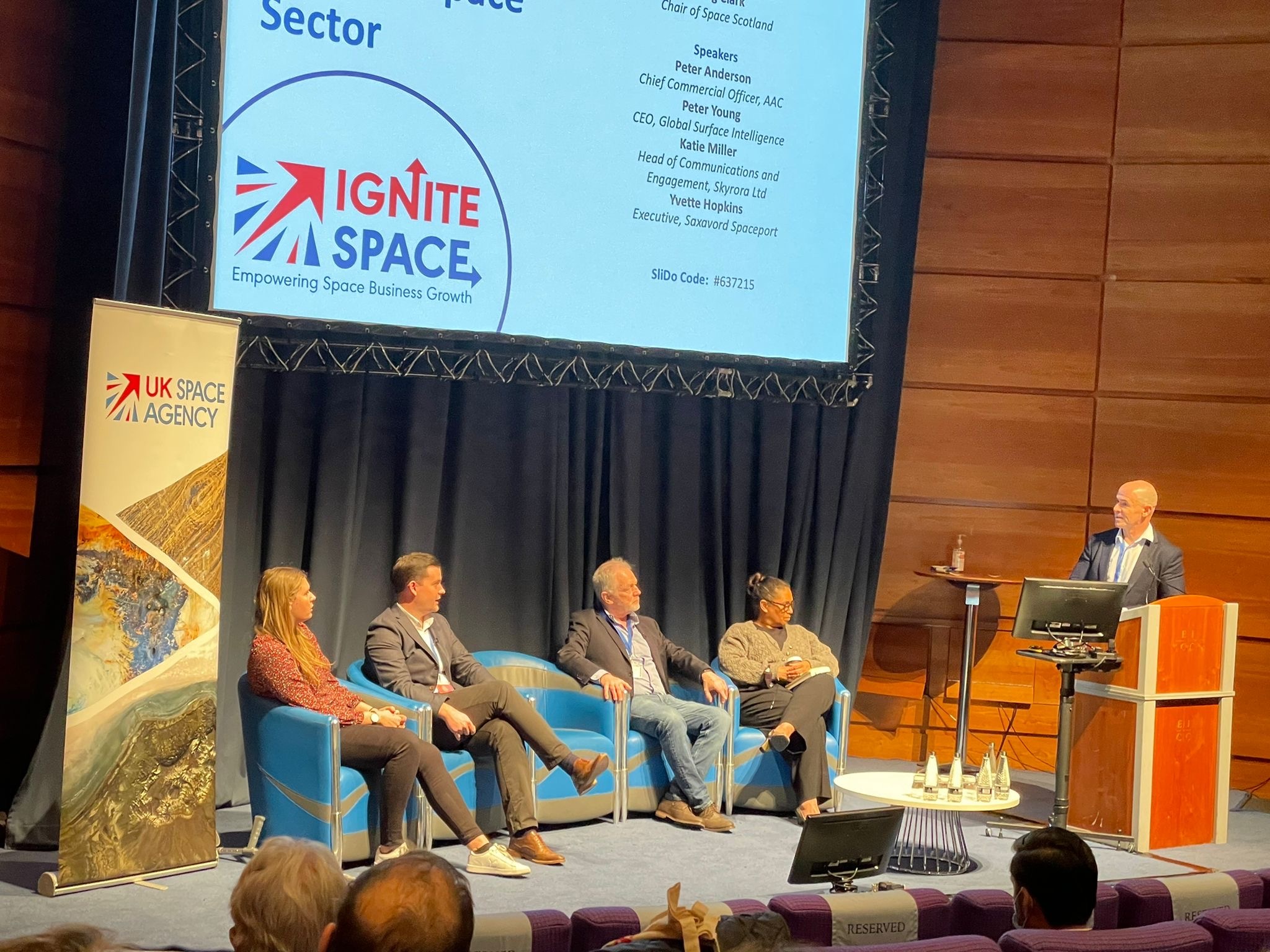 EDINBURGH, SCOTLAND — Scottish space industry leaders gathered at the Ignite Space conference in Edinburgh on Thursday, to discuss opportunities to build off of Scotland’s new national space strategy, which was released last month following the United Kingdom’s strategy. The event was put together by the UK Space Agency, Satellite Finance Network (SFN) and Alden.

Yvette Hopkins, executive vice president of the SaxaVord Spaceport, formerly known as the Shetland Space Centre, sees progress with the national space strategy, but called for more leadership to pull the industry forward.

“We need real leadership and all of its components. We have a strategy. Do we have the resources aligned behind it? As we galvanize Scotland, I don’t hear my leaders leading the charge. I don’t see the lightning rod. What I think is you have a U.K. strategy, a Scotland strategy, a defense strategy, and an innovation strategy. I don’t see it joined together. We need more leadership. We need that JFK moment that will galvanize everyone here,” she said, referencing the speech given by former U.S. president John F. Kennedy in 1962 detailing plans to reach the Moon.

Hopkins talked about the development of a grass roots capability and many follow-on effects of a spaceport. She added, “There is the sector growth. But, there is the space economy. You have the second or third order effect. For example, someone who has a small cafe near the launchpad. They can call themselves a space cafe, for example.”

Katie Miller, head of Communications and Engagement for launcher Skyrora agreed on the importance of developing this launch capability, saying that with Scotland’s capabilities in satellite manufacturing and data applications, launch capability is necessary so business don’t have to send satellites out of the country for launch. She said this will create huge economic and social benefits including tourism and jobs.

Miller highlighted the fact that Skyrora has grown significantly over the last 12 months, and that there is a strong appetite for Scotland’s youth to get involved in the local space industry.

“For example, we had 1,000 applicants for six roles we advertised recently,” she said. “We need support from the government to support young people to go on training. Can we repurpose people from the oil and gas industry? How can we overcome the higher salaries that people traditionally got in oil and gas?”

One of the issues that came up was the potential to develop a type test facility in Scotland like the Harwell Campus Space Cluster in the U.K. that will encourage space businesses. Peter Anderson, CCO of AAC Clyde Space said, “How do you win an order for 100 satellites before you have the capability able to do it? There is the chicken and egg here. The market is not particularly linear. We need help with testing. It would help to have a Harwell type facility [in Scotland]. We need some support in terms of a national manufacturing type facility. We could grow a center here.”

Iain Stewart, Parliamentary Under Secretary for State for Scotland, gave the opening keynote, linking the space industry in Scotland to the COP26 climate change event in Glasgow. He said the space sector was at the forefront of this knowledge.

“AI and data analysis when looking at climate change issues are key. The U.K. space sector is at the forefront of climate data action and understanding our world from space. It will enable people to utilize data. There are 56 climate variables which are used to characterize observations. 50% of these can only be measured by space. Our understanding of climate changing is growing as a result.”

Stewart pointed to the fact that the U.K. space sector generates 16.5 billion pounds ($22 billion) in revenues, describing it as a world leader, with 1,200 organizations.

“We want to support British startups. Scotland manufactures more satellites than anywhere else in Europe. Over the last few years, we have seen rapid growth. 19% of U.K. space jobs are now in Scotland. It is also part of our vital fight against climate change.”

With COP26 going on at the same time, it was hard to escape the links between climate change and the role of space-based assets. Pamela Smith, head of Institutional Engagement for AAC Clyde Space said space data was vital to monitor and support essential climate variables.

“It gives us a unique global perspective. It enables us to look at historical trends, as well as being vital to make future predictions. I think it is important to change the mindset people and educate the wider public of the image of space. We need to talk about the amazing datasets that impact our quality of life. We all have a real responsibility to communicate with ministers, each other, the general public, and be accountable.”

Another speaker was Tim Davies, CEO of Hiiroc, a company that aims to produce zero-emission, low-cost hydrogen by de-carbonizing hydrocarbon gasses. Davies spoke of empowering the hydrogen economy. He said politicians needed a better understanding of science.

He said, “We have too many politicians backing technologies that don’t work. They need to understand physics better. They are just backing stuff to get them elected – such as electric cars. Regulation and decision makers need to up their expertise. The ones are doing it to justify their shareholder presentation are not correct. We need to have a moral conscience, we are not doing it to look good.”

Angela Mathis, chief executive for ThinkTank Maths said when looking to build a more sustainable space economy it is all about “investment, investment, and more investment” to create a new supply chain.

“We don’t have a supply chain in energy transition,” she said. “The switch would come when the investment community decides to go fully green. We have got to create new technologies, back the new players and get the new supply chain. We all have to work together as part of the new Scottish space strategy. We need to get together and create.”