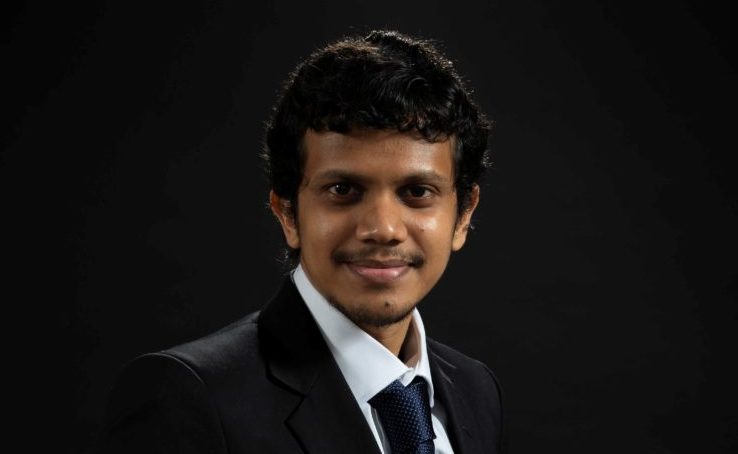 Rama Kasi works for ManSat, which provides support for the satellite spectrum filing process in the Isle of Man, London, Geneva, and around the world. He previously worked as network engineer at Ericsson. Rama holds a Masters in Space Studies from International Space University, and a Bachelor of Electronics and Communication Engineering from Amrita School of Engineering.

A member of the Institute of Electrical and Electronics Engineers, EuroScience and Space Generation Advisory Council, Rama worked as an intern in the Indian Space Research Organization’s Satellite Center, focusing on “Pseduo-Noise Regenerative Ranging for Deep Space Missions.” He was also selected as an interim communication subsystem lead for a Mars Robotic Mission at NASA Ames Research Center.

Via Satellite has talked with Millennials and Generation Z who are already making an impact in this industry, about how they see the future. Read the rest of the interviews in our December issue.

VIA SATELLITE: What attracted you to a career in the space/satellite industry? Why did you choose it over other high-tech industries?

Kasi: The space and satellite industry is one of the most exciting sectors of the modern world. It is such a multi-disciplinary sector with various segments that its impacts directly influence the quality of life of every individual on the planet, unlike other sectors that are narrow and offer their services to a subset of the world’s population. And, because the space industry is run purely on passion and curiosity, exploration and innovation have been at the forefront which attracts young people like me to pursue a career in the industry.

Kasi: It might be true that the industry had a conservative mindset in the late 20th century after the space race, but not anymore with the commercialization of space. Now the industry is changing so dynamically that it is creating new verticals through innovation, research and development like never before and the global space economy is soon expected to reach $500 billion.

VIA SATELLITE: Why do you think space is an exciting industry for young people to work in?

Kasi: When it comes to working, “TGIF” is very a popular term to describe the plight of employees. Many people may agree with it, but not the professionals in the space sector. This industry doesn’t just require people with skills but with interest, curiosity and enthusiasm for everything that’s happening, not just on our planet but in the universe as a whole. Young people are full of energy, productive, very innovative with fresh thoughts, and broad-minded. This mindset, combined with the curiosity in this industry, separates them from being ordinary and provides a great platform to work with passion.

VIA SATELLITE: Issues such as climate change are becoming more and more important. The school protests around the world are evidence of this. What role do you think satellite and space can have in tacking such major issues? Do you believe space can make a difference?

Kasi: The space industry has already proven its role, be it in creating awareness on climate change or prevention and reduction of natural disasters. Every segment of the space industry, starting from satellite communications to navigation to earth observation, has regularly proved to be a one-stop solution to provide evidence and services to tackle climate change. With these, there’s a dramatic change in how we perceive the world concerning the changes in this biosphere. This is just the tip of the iceberg of what the space industry can provide. With the advancement in technologies, we are witnessing an ever-increasing need for the services from space to better understand and mitigate climate change.

VIA SATELLITE: If I could ask you to be a futurist for a moment. What is your vision for a space-based society in the future? How do you think space can impact humanity?

Kasi: Before being futuristic, the space industry has already been impacting billions of lives either directly or indirectly. With the new services being offered globally, to the unconnected, the impact on humanity is going to be tremendous. Before long, every individual on the planet will be using a space-based service. Examples like providing broadband to everyone on the planet, which in turn leads to improving the quality of life, the non-replaceable services offered by navigational satellites that are used every day, and the potential of Earth Observation that the world is witnessing, offering services from agriculture to oil and gas and in the detection and prevention of natural disasters, is a playing major role in creating a space–based society.

VIA SATELLITE: Do you think more can be done to attract young people to work in the space industry?

Kasi: The industry is driven by passion. Most people want to have a career in space because of their passion. But often we have seen, especially in developing countries, the role that space can play is not known. The industry had been lacking in showing its integration into people’s lives and had in some ways been far removed from the general public. With more and more commercialization, this is slowly changing and there has been a clear message that this industry is not associated with governments and/or defense sectors alone. This awareness should be spread everywhere and young people should be encouraged and be able to follow what they had dreamt in their childhood.

VIA SATELLITE: What are the three best things about working in the space industry? What also are the three things you don’t like?

Kasi: Taking any vertical of the industry, it is firstly driven by passion — the professionals in the industry are very passionate about what they do. As I mentioned earlier, the quality of life of every individual can be influenced directly through our work. And, unlike other industries, there’s always something new, no question of stagnation. While humanity exists, the space industry’s services will continue to grow every year. However, one of the biggest issues with the space industry is the heavy association of the industry with geo-politics. While commercialization might reduce barriers and internationalize the industry, with the announcement of the U.S. Space Force and other national security strategies by other nations, young people could face reduced opportunities to enter the space sector because a person’s nationality will be given priority over everything else.

VIA SATELLITE: What can Millennials/Generation Z bring to this industry that is different to what has gone on before?

Kasi: For any nation and any industry, young people are the hope and future. Millennials/Generation Z might have missed the space race, the first human stepping on the Moon and many other milestones in the history of humanity, but they are going to complement them and are going to rewrite the history pages going forward. As I have said, Generation Z/Millennials are full of energy with a much more global and broader perspective.

Unlike other generations, Millennials are well-versed with the use of technology and have integrated it into everyday activities. They have a clear vision on how to take their career forward, compared with older generations. In the midst of the fourth industry revolution dubbed Industry 4.0, Generation Z/Millennials will help the space industry in generating more and more services to the people and in further exploration.

VIA SATELLITE: Considering the onset of 5G technologies, do you think there is a chance that satellite/space-based technologies could be marginalized in the future?

Kasi: Not at all! There are two aspects. Firstly, there are technologies and services from the space industry that are unique and they standalone irrespective of the changes in other sectors. The advancement in other technologies will enhance the capabilities but can never replace. Second, and most importantly, the space industry is always integrating and adapting to the changes brought forth by the new technologies by exploring and utilizing every component of the fourth industry revolution or Industry 4.0.

VIA SATELLITE: Finally, give me one example of a new industry/vertical based on a space-based technology?

Kasi: An idea of space–based internet to connect the unconnected and everyone in the world with the help of hundreds and thousands of satellites, and the use of Synthetic Aperture Radars (SARs) in Non-Geostationary Orbit (NGSO) satellites to provide downlink services are some of the examples of new verticals.